George Sorbane Quotes:  Anything vertical will eventually be horizontal.

We will NOT stand for looting, arson, violence, and lawlessness on American streets. My team just got off the phone with Governor Evers who agreed to accept federal assistance (Portland should do the same!)…
35.2K
65.9K
288.2K
Show this thread
President Trump Retweeted

Hurricane Laura is a very dangerous and rapidly intensifying hurricane. My Administration remains fully engaged with state & local emergency managers to continue preparing and assisting the great people Texas, Louisiana, and Arkansas. Listen to local officials. We are with you! 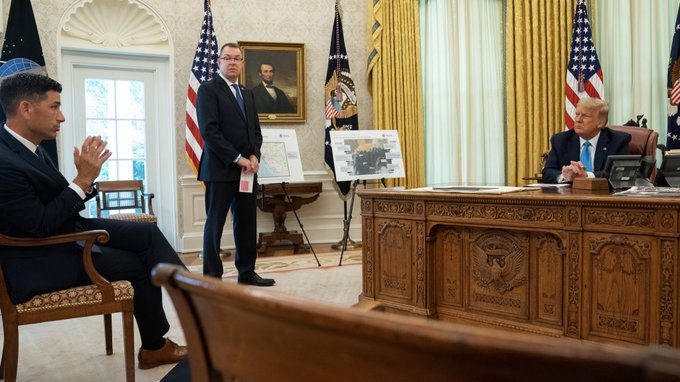 Governor should call in the National Guard in Wisconsin. It is ready, willing, and more than able. End problem FAST!
20.2K
39.2K
191.6K
President Trump Retweeted

…They must stop calling these anarchists and agitators “peaceful protestors”. Come back into the real world! The Federal Government is ready to end this problem immediately upon your request.
8.4K
20.8K
77.9K
Show this thread
President Trump Retweeted

), the Governor of Oregon, and Mayor

of Portland, to call up the National Guard like should have been done 3 months ago…

A private security employee at an Orange County retirement community, identified as  Donovan Pham Nguyen, 34, of Riverside,  was arrested on a criminal complaint alleging that he pretended to be a federal law enforcement agent, and charged with one count of false impersonation of a federal officer or employee.

The defendant pretended to be a special agent with U.S. Immigration and Customs Enforcement’s (ICE) Homeland Security Investigations (HSI) for many years, and used the false title to obtain things of value. Nguyen never worked for HSI, although he previously was a privately contracted security guard at a Department of Homeland Security (DHS) facility. He left that job in 2015 after an internal investigation was launched resulting from allegations that he printed fake HSI identification documents, the affidavit states.

“Impersonating a federal agent is a serious crime, one that is not victimless and harms law enforcement officers’ ability to protect the public,” said David A. Prince, Special Agent in Charge for HSI Los Angeles.

“We’re committed to safeguarding the public from scam artists and others who exploit people’s fears for no other reason than to enrich themselves.”

In a major speech at the White House, Mr. Trump will present himself as the law and order candidate, and lay into Democratic challenger “Uncle”Joe, “Sleeping in a wrong century” Biden, during treacherous times of simmering tension over police shootings and racism, and is also expected to talk about the unrest in American cities, including Kenosha, Minneapolis, Portland, Seattle and Chicago.

“Fake News” critics question whether the president should use the White House for partisan political campaigning during his closing of party’s convention, as Kentucky Senator Mitch McConnell is speaking with a pre-recorded message from ‘Middle America’, decrying Democrats as the party that ignores much of the US as “flyover-country”.
.
https://sputniknews.com/us/202008271080297401-trump-expected-to-call-for-party-unity-slam-biden-radical-agenda-at-rnc-finale/

Protests in Wisconsin’s city of Kenosha, ignited by a video of a white police officer shooting a black man named Jacob Blake, was dangerous place of violence, looting, arson, and violent fires, as well as two murders and one injured, forcing the White House prod the state to deploy some 1,000 National Guard troops and 200 federal agents.

CNN rolled out a placard saying ““FIERY BUT MOSTLY PEACEFUL PROTESTS AFTER POLICE SHOOTING”, causing intense backlash from many, including US President Donald Trump’s son Eric, who labeled CNN a “national embarrassment” in a tweet commenting the chyron.