Thank you Pensacola, Florida! Together, we are going to Make America Great Again! 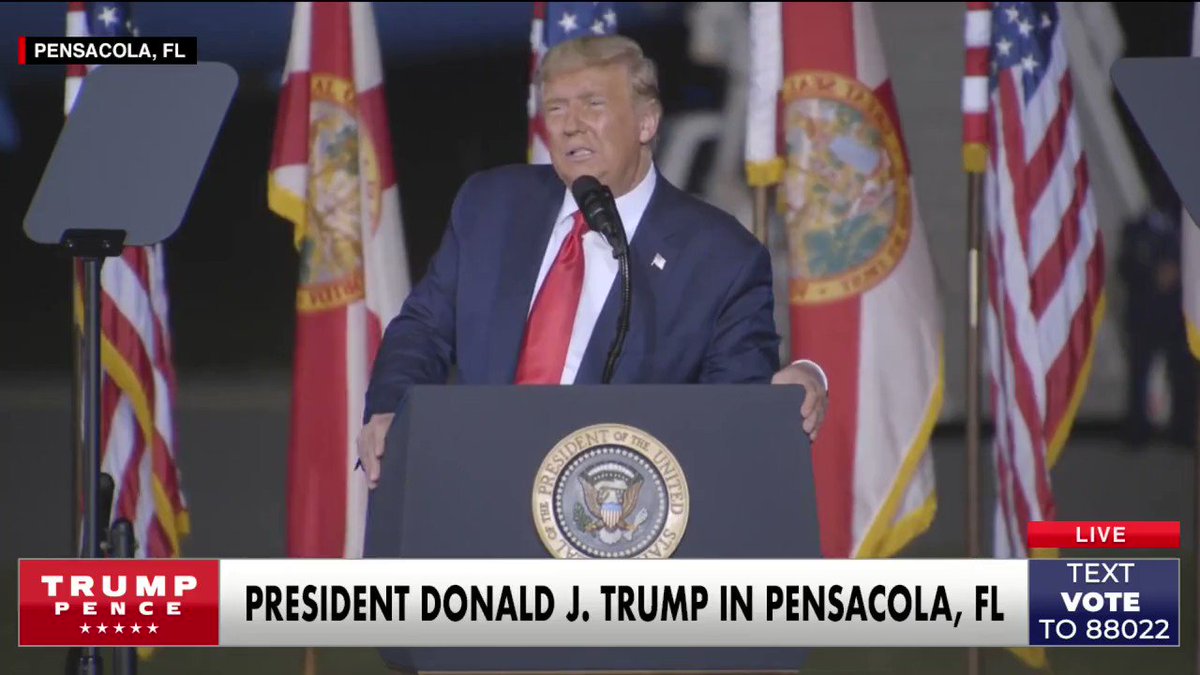 Tim O’Brien
@TimOBrien
· 9h
“When he was fired, he not only lost his job, he lost his mind.” – Donald Trump on Steve Bannon, 2018. Since then, federal authorities have filed fraud charges against Bannon for a bogus fundraising scheme for Trump’s southern border wall. Only the best people. twitter.com/warroompandemi…
11.8K
12.7K
41.7K

The Economy is about ready to go through the roof. Stock Market ready to break ALL-TIME RECORD. 401k’s incredible. New Jobs Record. Remember all of this when you VOTE. Sleepy Joe wants to quadruple your Taxes. Depression!!! Don’t let it happen! #MAGA
6.5K
10.2K
33K
The White House
@WhiteHouse
·
Pinned Tweet

Tony Shaffer
@T_S_P_O_O_K_Y
· Sep 28
Yep 3 Supreme Court Justices & 3 Nobel Peace Prize nominations… Hmmm…I’d say this is pretty darn good… The Left is upset that @realDonaldTrump has not started any new wars… The never Trumpers are upset that he has lived up to his campaign promises… Strange times… twitter.com/realDonaldTrum…
2.1K
3.6K
13.9K

Mollie
@MZHemingway
· Oct 6
Democrats are laundering their (admittedly weak) anti-religious smear of Amy Coney Barrett through Emma Brown, the same reporter they used to launch their massive and media-coordinated anti-Kavanaugh operation that so many Americans found so despicable. twitter.com/bethreinhard/s…
1K
3.2K
10.7K
.

France registered more than 40,000 cases over a 24-hour period, while Italy has also reported a one-day record number of infections, despite a late night curfew that  is set to take effect in Rome.

“The situation is grave,” French Prime Minster Jean Castex said as health authorities reported 41,622 new cases over 24 hours, a figure that was published shortly after the government announced a broad extension of the curfew put in place a week ago in Paris and other major cities.

As of Friday at midnight, two-thirds of the French population will be subjected to the curfew as authorities try to stem the tidal wave of infections.

President Trump and Joe Biden sparred for the last time before election day, and even though they had their moments, Trump fared better with an unusually calm performance, using the last chance to appeal to a large nationwide audience, with both men seemed to be aware of how much was at stake.

Trump acted significantly more presidential than he had in recent memory, being calm and using familiar arguments to attack Biden’s record when it was his turn to speak. And Biden, who Trump and his supporters refer to as Sleepy Joe, was very much awake, passionately arguing against the incumbent’s policies in areas like immigration and the handling of the coronavirus crisis.

“It was definitely better than the last one,” J. Miles Coleman, election analyst with the University of Virginia Center for Politics, told DW.

“Trump was more message-focused and there were no fights with the moderator.”

That marked a big difference from the last go-around.

Based on data from local state health authorities, the “Covid Tracking Project” reported 83,010 new US cases, as Surgeon General Jerome Adams warned that hospital admission numbers are growing, even when mortality rates are falling due to better patient care, and it comes as pharma giants AstraZeneca and Johnson & Johnson resume US vaccine trials after approval from regulators.

The World Health Organization has also warned that countries in the Northern Hemisphere are at a “critical juncture”.

“The next few months are going to be very tough and some countries are on a dangerous track,” said director general Tedros Adhanom Ghebreyesus, speaking with reporters.