Nate Simington, a very smart and qualified individual, is having his Senate hearing today. Republicans will hopefully confirm him to the FCC ASAP! We need action NOW on this very important nomination!!

Happy 245th Birthday to the 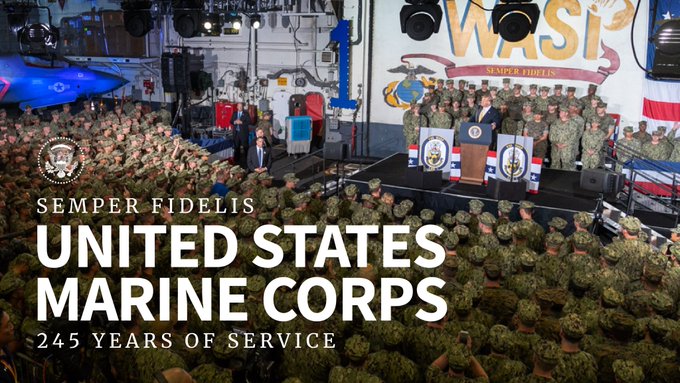 0:19
245 Years of Honor, Courage and Commitment Today, we remember the service and sacrifice of all Marines, and honor the legacy passed down through generations. #HappyBirthdayMarines!
3.5K
10.3K
51.2K

Republicans, don’t let Andrew McCabe continue to get away with totally criminal activity. What he did should never be allowed to happen to our Country again. FIGHT FOR JUSTICE!
14.1K
30.7K
129.2K
Who to follow
Senator Harry Reid and 19 others follow

2………….> COVID19 Vaccine Conspiracy: Trump’s Anger?
.
Mr. Trump apparently feels that the announcement of progress on a coronavirus vaccine was likely specially timed to not be made before the 3 November presidential vote, so as to undermine his ratings, by reacting to pharmaceutical giant Pfizer Inc’s praise of its new COVID-19 vaccine, and accusing the company, the Democrats, and the US Food and Drug Administration of joining efforts to conspire to intentionally delay the announcement of the coronavirus vaccine until after the recent elections, alleging there were apparent political motives behind the timing:
“As I have long said, @Pfizer and the others would only announce a Vaccine after the Election, because they didn’t have the courage to do it before. Likewise, the @US_FDA should have announced it earlier, not for political purposes, but for saving lives”, Trump tweeted.
.
https://sputniknews.com/us/202011101081118684-trump-suggests-drug-making-giant-pfizer-conspired-with-fda-to-break-vaccine-news-only-after/
.
3…………> GSA Sued By Biden: Election Under Trump Attack?
.
US “Fake News” media declaration of Democratic candidate “Uncle” Joe, “Sleeping in a wrong century” Biden to be the winner of the election was assailed by President Trump, who claimed on multiple occasions that the election was conducted fraudulently, and his lawyers have already begun filing litigation claims in courts across the United States.
The Biden team are weighing the option of suing the General Services Administration (GSA) over the delay in recognizing the outcome of the election as projected by US media and transferring the presidential powers from Donald Trump to Joe Biden, Reuters reported citing a member of the team.
.
https://sputniknews.com/us/202011101081112726-us-election-live-updates-biden-team-reportedly-mulls-lawsuit-over-power-transfer-delay/
.
4…………> Why Latinos Backed-Up Trump?
.
A record 32 million Latinos were eligible to vote in the 2020 election, making them the largest minority bloc of voters in the country that have historically lean Democrat, but their support for the Republican party has been increasing.
.
https://www.bbc.com/news/av/world-us-canada-54861000
.
.
5…………..> GOP Supports Trump: Except The Rhinos?
.

President Trump is so far refusing to admit losing the election, making unsubstantiated claims about voter fraud, while the US justice department has given federal prosecutors an unusual go-ahead to investigate alleged vote irregularities, with top Senate Republican Mitch McConnell saying that Mr. Trump has every right to pursue legal challenges.

Results from the states of Georgia, Arizona, North Carolina and Alaska are still outstanding.