SCOTUSblog
@SCOTUSblog
· 11h
Just before midnight on the night before Thanksgiving, the Supreme Court blocked New York Gov. Andrew Cuomo from enforcing attendance limits at religious services. The vote is 5-4, with Roberts and the three liberals dissenting. Here is the ruling: https://supremecourt.gov/opinions/20pdf/20a87_4g15.pdf…
Show this thread
16.5K
23.3K
115.9K

in GA & nationally. We The People will not allow it be stolen. 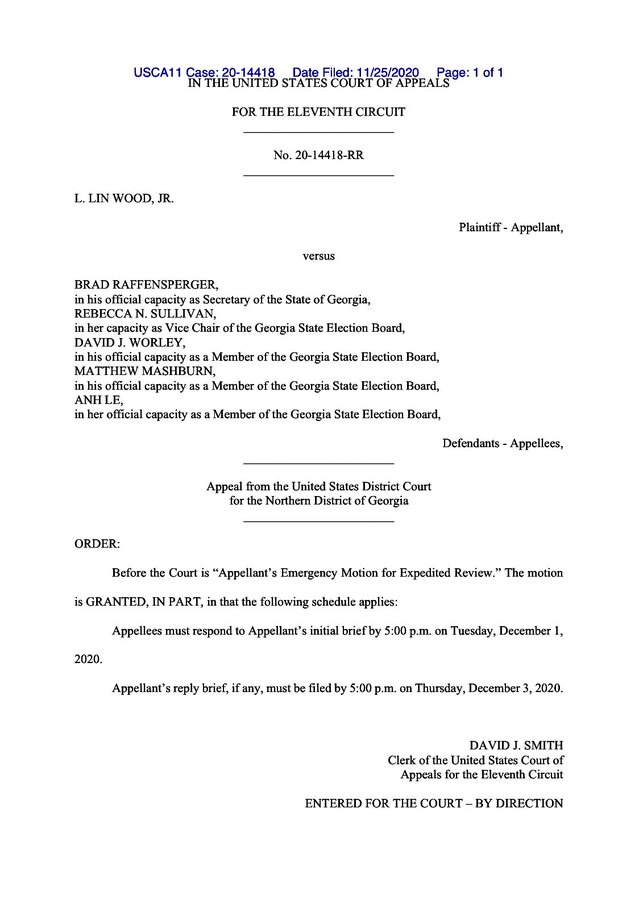 SAN JOSE, Calif. – Two people are dead after the Santa Clara County Jail ignored a detainer lodged by U.S. Immigration and Customs Enforcement (ICE) and released a dangerous criminal alien back into the community. ICE maintains cooperation with local law enforcement is essential to protecting public safety, and the agency aims to work cooperatively with local jurisdictions to ensure that criminal aliens are not released into U.S. communities to commit additional crimes. Unfortunately, due to these dangerous sanctuary laws, two more people lost their lives, Nov. 22., allegedly at the hands of a criminal alien and repeat felon, lives that may have been saved had multiple previous immigration detainers been honored.

The alleged perpetrator, Fernando De Jesus Lopez-Garcia, is a repeat immigration offender with a significant criminal history spanning back nearly 15 years that includes convictions for battery of a spouse, assault with a deadly weapon, inflicting corporal injury on a spouse, battery of an officer, and vandalism. On Nov. 22, the San Jose Police Department arrested De Jesus Lopez-Garcia for two counts of murder, three counts of attempted murder, battery on a spouse or cohabitant and violation of a protective order. Officers from ICE’s Enforcement and Removal Operations (ERO) lodged an immigration detainer with the jail the following day.

“Our deepest condolences go out the victims and their families in this case,” said David Jennings, San Francisco ICE ERO field office director. “Here we have catastrophic proof of the abject failure of California’s sanctuary policies. The only person this policy protected was a criminal; permitting him to reoffend over and over again. Had those immigration detainers been honored, or had ICE been notified on any of the other multiple occasions he was arrested and released from local jails, we would have taken him into custody. Regrettably, politics continues to prevail over public safety, the detainers were ignored, and De Jesus Lopez-Garcia was released to the street.”
.
https://www.ice.gov/news/releases/criminal-alien-arrested-double-homicide-after-local-law-enforcement-fails-honor-ice
.
3……….> How Not To Be A Oldy: Remember Words?
.

Have you noticed lately how some of our elected officials had trouble thinking of someone’s name, or a particular situation? Perhaps they can even see the face of the person in your mind’s eye, and would immediately recognize the name if a member of the press suggested it to them.

Word-finding problems are an almost stereotypical aspect of the cognitive issues that plague middle-aged and older adults, with these failures occur without warning for even the most familiar words and names a person knows. The most troublesome words, researchers have found, are proper nouns and the names of objects. This retrieval inability can last anywhere from a split second to minutes or even hours, and they can be exasperating. In fact, older adults frequently mention word-finding problems when asked about the annoyances of ageing.

In such cases, a person is certain she knows the word she is searching for. It may seem as if the Awol term is just on the tip of her tongue, but for some reason she can’t produce it, at least at that moment. In fact, psychologists refer to such experiences as tip-of-the-tongue (TOT) states. But are they really the harbingers of befuddlement that they appear to be?

.
https://www.bbc.com/future/article/20201125-on-the-tip-of-your-tongue-is-it-a-sign-of-a-bad-memory
.
4…………> The Good, Bad & The Eggly
.
Are eggs helpful to our health… or a cause of heart disease? Experts advise egg consumption should be part of a healthy lifestyle to be beneficial. But fears that eggs can be bad for us appear to have been laid to rest.
.
https://www.bbc.com/reel/video/p08ngz2r/the-truth-about-eating-eggs
.
5…………> The End Of A Love Story: Trump vs Fox News
.
President Trump tweeted that Fox News is “worse than fake news CNN”, recommending that followers “turn their dial” to the POTUS-friendly OANN network, which, along with Newsmax, has now repeatedly questioned Democrat Joe Biden’s projected win in the 3 November election, and now he has retweeted a video in which American actor Randy Quaid is seen reciting one of POTUS’ previous tweets that takes aim at Fox News.

The Independence Day actor, who is a staunch Trump supporter, posted the clip on his Twitter page earlier this month, also writing in capital letters, “Time to make [right-wing] OAN [One America News] and Newsmax rich. Fox [News] is dead to me”.

“Fox News daytime ratings have completely collapsed. Weekend daytime even worse. Very sad to watch this happen, but they forgot what made them successful, what got them there. They forgot the Golden Goose. The biggest difference between the 2016 Election, and 2020, was Fox News”, the 70-year-old quoted Trump as saying in an ominous voice, with red and green lights seen flashing in the background.
.
https://sputniknews.com/us/202011261081284821-fox-news-is-dead-to-me-trump-retweets-actors-jab-at-us-news-network/
.
..
6…………> A Message Of Peace