Rudy Giuliani will be on Greg Kelly Reports. 7:15 P.M.

The restaurant business is being absolutely decimated. Congress should step up and help. Time is of the essence!
13K
25K
117.2K
Donald J. Trump Retweeted

This was posted on our Department of State dashboard but had since been deleted. 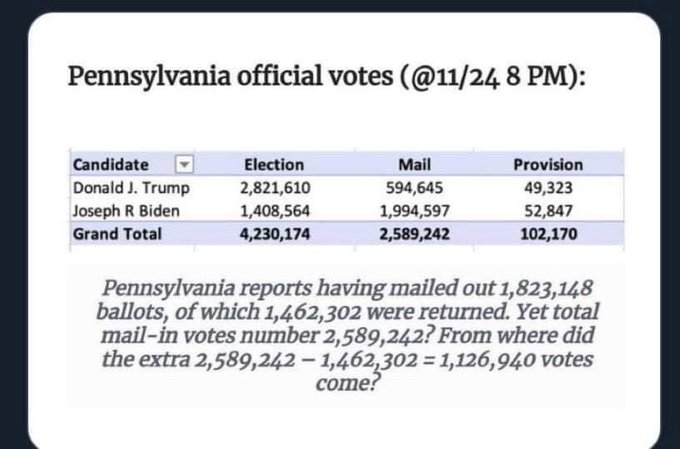 As President  Trump pardoned former national security adviser Michael Flynn, a man who had pleaded guilty in 2017 to making “false and fraudulent statements” to the FBI regarding the nature of his conversations with the Russian ambassador during the Trump transition, but later retracted his plea and accused the FBI of framing him, Hawaii Congresswoman and former Democrat presidential candidate, Tulsi Gabbard, urged Mr. Trump to use the time he has left in office to pardon former NSA contractor-turned-whistleblower Edward Snowden and WikiLeaks founder Julian Assange:

“@real Donald Trump Since you’re giving pardons to people, please consider those who, at great personal sacrifice, exposed the deception and criminality of those in the deep state,” Gabbard wrote, addressing Trump directly via his Twitter handle.

.
https://sputniknews.com/us/202011271081295338-tulsi-gabbard-asks-trump-to-pardon-snowden-and-assange-for-exposing-criminality-of-deep-state/
.
3…………> COVID19 Or Not: Germany’s Cities Would Shine For Christmas
.
Most Christmas markets in Germany have been cancelled. What remains is festive lighting in many cities. A journey through pre-Christmas Germany: From Lübeck to Nuremberg.
.
https://m.dw.com/en/christmas-shine-despite-the-coronavirus-germanys-cities-are-festively-lit/g-55748935
.
4…………>Facing COVID19 Head On: EU To Buy Billions Of BioNTech-Pfizer Vaccine
.

Following strong trials, the European Union agreed to buy up to 300 million doses of the BioNTech-Pfizer coronavirus vaccine, with deliveries expected to start by the end of this year, but

refused to provide details on how the vaccine would be rolled out, insisting that “a number of steps” needed to be followed beforehand, after early data suggests the vaccine protects more than 90% of people from developing Covid-19 symptoms.

Pfizer and BioNTech reported it had been tested on 43,500 people with no safety concerns raised.