Download #Sorbane’s book “The Princess of Central Park” at http://amazon.com/dp/B00F0W5580 . A #saga of two #AirForce #brats who have lost their loved ones in the horrors of #war, and end up homeless in #CentralPark. 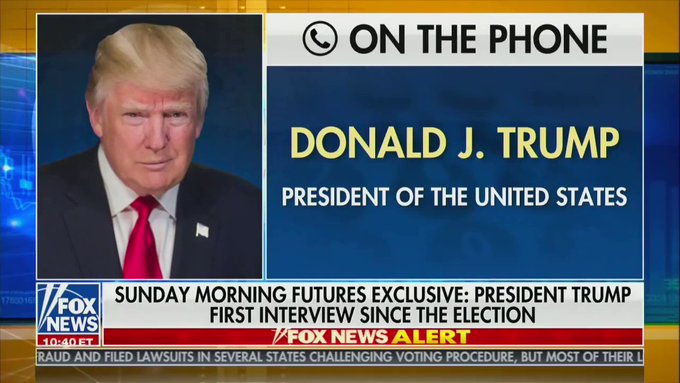 The President Trump interview will take place as the incumbent POTUS refuses to concede the 2020 election, pledging to “keep up the good fight” while his Democrat opponent “Uncle” Joe, “Sleeping in a wrong century” Biden, who has been projected by the media as President-elect, has appointed members to his cabinet and outlined plans for a potential Oval Office takeover in January.

Mr. Trump is expected to talk to Maria Bartiromo of FOX Business at 10 am ET on Sunday as part of Fox News’ Sunday Morning Futures in what will be his first interview since Election Day, following the legal battle over what it claims was voter fraud in key battleground states, even  though Georgia, Michigan, Nevada, and Pennsylvania have certified their election results in favor of Biden, certification from other states has yet to be announced.

The Electoral College is scheduled to meet on 14 December to vote for the next president of the United States.

Experimental mini-sub Fendouzhe is being used to observe the species that live on the ocean floor, as its team is also exploring the dangerous and restricted domain for exotic materials as part of China’s move to develop its deep-sea mining capabilities, all along setting a national record for the depth of its dive but was about 60 feet short of the world record.

The Fendouzhe, or Striver, descended more than 30,000 feet into the submarine trench in the western Pacific Ocean with three researchers on board, one the few people on the planet to have ever visited the bottom of the Mariana Trench, a crescent-shaped depression in the Earth’s crust that is deeper than Mount Everest is high and more than 6,650 miles long.

.
https://www.abc.net.au/news/2020-11-29/chinese-sub-reaches-deepest-ocean-trench-mariana-fendouzhe/12932462
.
4…………> On COVID19 Suicide Row: Japan
.
The world’s third largest economy, enforcing avoidance of harsh US and European-style lockdowns in the spring, has apparently paid the price for it, as Japan reported about 145,000 Covid-19 cases and 2,042 deaths since March, with its caseload estimated to be the 47th largest in the world, engulfed in a surge in suicides, with the number of people taking their own lives reportedly outstripping fatalities caused by COVID19 by nearly an entire order of magnitude.

Apparently 2,153 people in Japan committed suicide in October 2020, with the figures rising by over 25 percent, or 600 people, compared to the same period in 2019, and total suicide deaths reaching over 17,000 in the first ten months of 2020. It also vastly exceeds the nation’s murder rate: police in Japan recorded 950 murder cases in 2019.

.
https://sputniknews.com/asia/202011291081310641-epidemic-of-suicides-claims-more-lives-in-one-month-than-covid-has-in-eight-in-japan/
.
5…………> Climate Change: Polar Caps Melting Down Under
.
Sydney, Australia  reported its hottest November night on record, with the official start of summer still days away, the city indicating a minimum overnight temperature of 78F, and then hitting 104F during the daytime on weekend, as dozens of bush fires were already burning in New South Wales with hotter weather predicted for foreseeable future.

The states of Victoria and South Australia also reported soaring heat over the weekend.

“November has been quite unusual in many ways. We have only seen about half our normal rainfall and it is quite possible it will be one of our hottest Novembers on record,” Andrew Watkins, of the Bureau of Meteorology (BOM) noted on Friday.