The citizens of Venezuela have suffered for too long at the hands of the illegitimate Maduro regime. Today, I have officially recognized the President of the Venezuelan National Assembly, Juan Guaido, as the Interim President of Venezuela. 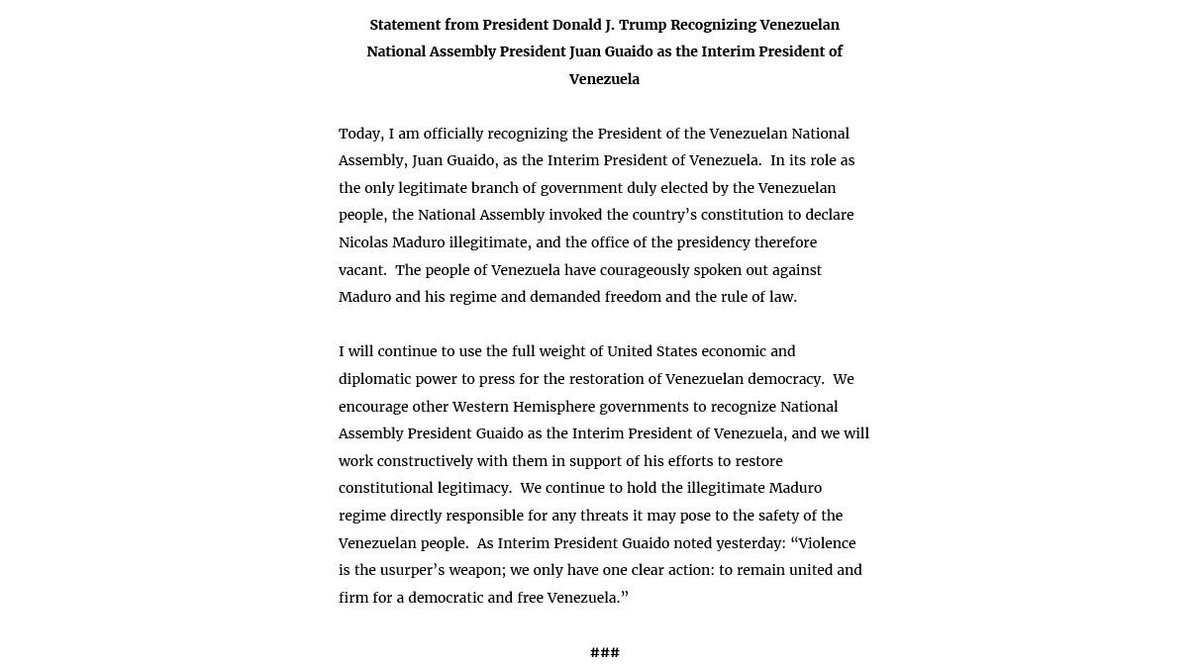 At least 58 terrorists armed with sophisticated firearms and rocket-propelled grenades were killed in Nigeria’s northwestern Zamfara state, as security operatives cracked down on their hideouts in the state, the military reported.

The army freed 75 kidnapped people who have been reunited with their families while injured security operatives were being treated at various government hospitals in the state capital Gusau and outside the state.

President Trump’s former lawyer Michael Cohen is postponing his scheduled testimony to Congress next month due to threats against his family from Mr. Trump and his attorney Rudy Guiliani, following back-stabbing cooperation with the Special Counsel office that led Mr.Trump to call him a “rat”.

“There is no question that his threatening and calling out his father-in-law, who, quote, ‘has all the money’, is not only improper and unseemly for a bully using the bully pulpit of the presidency, but the very definition of intimidation and witness tampering,” according to Mr.Cohen’s lawyer Lanny Davis.

Cohen was sentenced to three years in prison in December for crimes including orchestrating hush payments to women, in violation of campaign laws, before the 2016 presidential election

4…………>A Devil In Disguise: Ocasio/Cortez

A recent poll of Democratic voters indicates that 75% would consider voting Alexandria Ocasio-Cortez for president, despite the fact that is Constitutionally in-eligibles due to her young age.

Ms. Cortez and President Trump could not possibly be as far as possible regarding their political views, yet the Washington press corps that is fully controlled by the Council of Foreign Relations is delighted with her rise to stardom as they sincerely believe that she is the “God sent” dialectic contradiction that would again ignite the masses in the fire of the communists dream of the green pastures of “brotherhood of man.”

Disorders of circadian rhythm nave been observed to correlate with many human diseases, including sleep disorders, depression, diabetic mellitus, cancer and neurodegenerative diseases, such as Alzheimer’s disease.

Previously, mice and flies were widely used for the research of such diseases, but these animal models differ greatly from human beings in terms of activity routines, brain structure, and metabolic rate. (Xinhua)