@realDonaldTrump
Mr. President, I am an Iranian & I want to thank you for your maximum pressure policy & specifically targeting the mullahs’ regime ruling #Iran. I want the world to know that for 41 years the regime has made life a living hell for us Iranians.
210.1K views
0:12 / 1:09
0:56
210.1K views

@realDonaldTrump
President Trump is beating Biden by 7+ points in the latest CNN poll. And you can add 10% just because it’s a CNN poll! 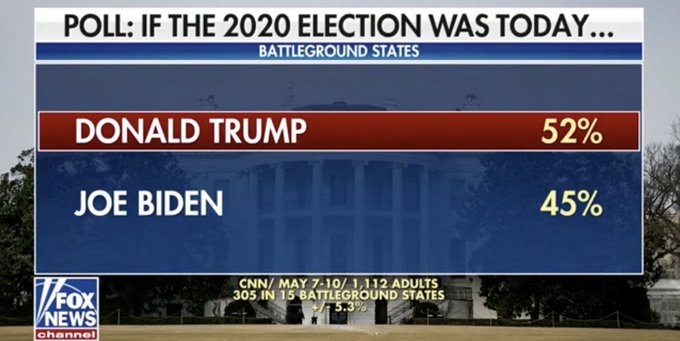 The cyclone Amphan made landfall last night (AEST) near the India-Bangladesh border with winds gusting up to 120 miles/hour per hour, approximately a category three on Australia’s cyclone scale, the latest storm out of Bay of Bengal, one of planet’s deadliest cyclone zones, that has weakened as it moved inland, leaving behind a trail of destruction, with at least 82 people reported dead.

The Bay of Bengal, a region holding the dubious distinction for producing cyclones that have claimed hundreds of thousands of lives, produced  the deadliest weather event on modern record, Cyclone Bhola, that on November 12, 1970, the storm made landfall over the Bhola region of what was East Pakistan, leaving some 300,00 to 600,000 thousands people dead.

Leading economist Dr. Nouriel Roubini has warned of a prolonged downturn and sluggish recovery from the coronavirus, predicting 10 years of depression and debt, true to his nicknamed Dr. “Doom” for his gloomy prophecies, the good professor inferred that some jobs will not come back after this crisis, even if the global economy recovers this year from the impact of the COVID-19.

He foresees a slow, weak recovery, on one side supported by the deluge of paper money provided by the Fed, while on other hand hampered by the zero interest rates, increased US and world’s debt load, and now warning about an unprecedented recession, compared to the financial crisis in 2008 foresaw before many others:

“During the global financial crisis it took about three years until output fell sharply. This time around it didn’t take three years, not even three months. In three weeks there was a freefall of every component,” saying any recovery will be in the shape of what economists call a “Greater Depression”.

Bibi1581.com has postulated long ago the three distinct stages of senility due to old age:

The presumptive Democratic nominee, and the former VP of our beloved 1st Muslim President, Grand Ayatollah Barack, “We must spread freedom around the world by reading our citizens emails” Obama, “May Allah Shadow fall upon him”, “Uncle” Joe, “Sleeping in a wrong century Biden, is clearly in stage three of the above theorem,  landing in hot water after apparently stating what political preferences an average African-American should have in the 2020 presidential election. After long, and celebrated broad support among African-Americans in the US, and having involved in numerous recent blunders, he faced backlash from the black community, as well as from his political opponents after he suggested that a person intending to vote for Trump in the upcoming election “ain’t black”. Katrina Pierson, a leader of the Black Voices for Trump group, branded the “you ain’t black” comment “racist and dehumanizing” for allegedly attempting to dictate to African-Americans how they should vote.

Anti-vaccine protesters have repeatedly accused multi-billionaire Bill Gates of being involved in conspiracy theories related to the coronavirus pandemic, as he had contributed millions of dollars to the development of a COVID-19 vaccine and testing, as part of global efforts to fight the virus.

Not surprisingly, more than 40% of self-described Republicans and Fox News viewers believe in a conspiracy theory that Microsoft co-founder Bill Gates plans to use a future COVID-19 vaccine in order to implant microchips in billions of people and monitor their movements, with 26% of respondents  rejecting the theory as false, and 31% more said that they were not sure..