“I am concerned about lowering impeachment standards to fit a paucity of evidence and an abundance of anger.” — Jonathan Turley
0:08
Donald J. Trump Retweeted

is celebrating USMCA in Michigan this afternoon! Watch LIVE at 4:20 p.m. ET: http://45.wh.gov/RtVRmD 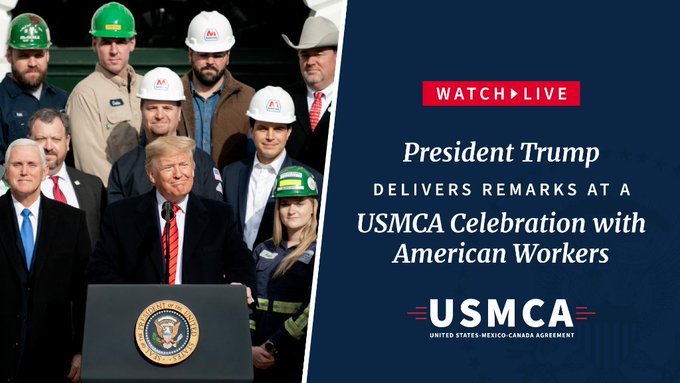 Working closely with China and others on Coronavirus outbreak. Only 5 people in U.S., all in good recovery.
Donald J. Trump Retweeted

17 witnesses—picked by Democrats—have already testified. But if Democrats want more, here are some suggestions

US Secretary of Commerce Wilbur Ross said  that the corona-virus outbreak is a positive development for the US economy in the long run, as the virus is “another risk factor” companies will have to take into account when choosing to do business in China.

“You had SARS [severe acute respiratory syndrome]; you have the African swine virus there; now you have this. It’s another risk factor that people need to take into account, so I think it will help to accelerate the return of jobs to North America – some to US, probably some to Mexico as well,” he said said.

The corona-virus, which originated in Wuhan, China, in December, has claimed the lives of at least 171 individuals and infected at least 8,240.

Following an 18-month investigation, the FAA accused Southwest Airlines of failing to prioritize passenger safety, and also alleged that the regulator lacked proper oversight of the airline in recent years, allowing  Southwest to fly 17 million passengers on planes that had “no certified maintenance records,” an example of that when a Southwest jet smashed two wingtips on the runway while attempting to land during high winds in 2019.

The report specifically referenced FAA managers at the agency’s Dallas/Fort Worth, Texas, office who supervised Southwest – which is headquartered in Dallas – and allowed the airline “to fly aircraft with unresolved safety concerns.” According to the audit, almost two-thirds of the 46 FAA employees interviewed during the OIG’s investigation “raised concerns about the culture at Southwest.”

“It is clear that the Agency is not yet effectively navigating the balance between industry collaboration and managing safety risks at the carrier,” the report said of the FAA.

Democrats launched an impeachment inquiry against President Trump in autumn last year following a whistle-blower’s complaint that the US president pressed his Ukrainian counterpart Zelensky to investigate former US Vice-President Joe Biden and his son Hunter regarding their business activities in Ukraine.

The US Senate is holding a question-and-answer session in Washington as President Donald Trump’s impeachment trial enters its ninth day following an ultimatum by Senate Majority Leader Mitch, “Harry’s Twin” McConnell that gave Democrats and Republicans 24 hours each to deliver their opening arguments (actual process took more than three days). Later, Senators were given a total of 16 hours to submit their questions in written form to House prosecutors or the White House defense team.

With Democrats’ hopes of calling new witnesses all but dashed, Donald Trump’s Senate impeachment trial could finish in the coming hours.
Republicans are pushing for a final vote — one that likely ends in the President’s acquittal.
Follow all the action from the Senate chamber in our live blog below.(abc.net.au)

3h
Here we go again, another Con Job by the Do Nothing Democrats. All of this work was supposed to be done by the House, not the Senate!

Donald J. Trump Retweeted
Donald J. Trump
@realDonaldTrump
19h
We are helping Apple all of the time on TRADE and so many other issues, and yet they refuse to unlock phones used by killers, drug dealers and other violent criminal elements. They will have to step up to the plate and help our great Country, NOW! MAKE AMERICA GREAT AGAIN.

U.S. Immigration and Customs Enforcement (ICE) has repeatedly asked local jurisdictions to reconsider non-cooperation policies because those policies put politics before public safety. On Friday, ICE released more examples of foreign nationals with active ICE detainers who have been detained for serious criminal offenses. ICE asks each of these jurisdictions to transfer these individuals to federal custody instead of releasing them to the community where they may reoffend.

ICE maintains that cooperation with local law enforcement is essential to protecting public safety, and the agency aims to work cooperatively with local jurisdictions to ensure that criminal aliens are not released into U.S. communities to commit additional crimes.

“The only way a person is subject to an ICE detainer… is if they are handcuffed and arrested for a crime committed in the local community,” said acting ICE Director Matt Albence.

The Democratic-led House of Representatives voted to send two formal charges against Donald Trump to the Senate, clearing the way for only the third impeachment trial of a US president to begin next week, as members voted 228 to 193 to give the Senate, controlled by President’s fellow Republicans, the task of putting him on trial on charges of abuse of power for asking Ukraine to investigate political rival Joe, “Sleeping in a wrong century” Biden, and of obstruction of Congress for blocking testimony and documents sought by Democratic politicians.
The Senate is expected to acquit Mr. Trump, keeping him in office, as none of its 53 Republicans has voiced support for removing him, a step that under the US Constitution would require a two-thirds majority in the 100-seat chamber.

“We are here today to cross a very important threshold in American history,” House Speaker Nancy, “Anyone caught urinating in front of my mansion will be deported to Arizona” Pelosi said before the vote.

House intelligence committee chairman Adam,”Pencil Neck” Schiff, a former federal prosecutor, was selected to head the team of House “managers, and the trial will be overseen by US Chief Justice John Roberts.

“We’ve got the equivalent of three football stadiums of $100 bills,” the chief executive of the Association of Superannuation Funds of Australia, or ASFA, Martin Fahey observed, as the total pool of Australian superannuation has now hit $3 trillion and last year, at 15.2 per cent, it produced the best return, on average, since 2013.

“Over a 15-year period we would typically expect funds to return 5, 6 maybe 7 per cent, but we’ve had extraordinary results mainly driven by the outstanding performance of both international and domestic equities,” he said.

Figures from SuperRatings show the median, or typical, balanced fund produced a slightly lower return of 13.8 per cent last year, but that was still the best in six years.

Mr. Fahey said Australia’s financial markets were relatively small so, in an effort to stretch returns, local fund managers were investing more of their clients’ super in international markets, including the US.

“I think what we have to be increasingly aware of is that, as our superannuation system has grown, increasingly, money has been deployed offshore,” he said.

“So that allows us to take advantage of international economic growth.”(abc.net.au)

Violins are bathed in ultraviolet light to cure and darken the varnish at the Chicago School of Violin Making in Skokie, Illinois, the United States, on Jan. 14, 2020. The Chicago School of Violin Making, teaching the traditional skills of the instrument’s making, is located at Skokie, a suburb of Chicago. It enrolls local and international students who have the intentions to become professional makers of the violin and other instruments. (Photo by Joel Lerner/Xinhua)