I am deeply saddened by the loss of my friend Charles Evers. Charles was a trail blazer in politics and a fearless leader, alongside his brother Medgar, for Civil Rights. 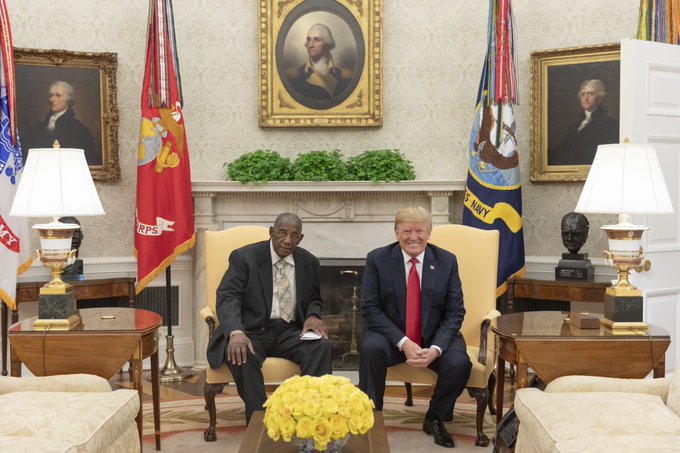 .
In the liberal aka “communist” city of Portland, Oregon, an ever heating confrontation between authorities and “fire-setting” hecklers continues, as the demands for defunding the police are only getting louder forcing, President Trump to send in the special forces.

“We shouldn’t be afraid of them, they should be afraid of us, “protestors holler, meaning the people opposing the police, a rowdy and increasingly dangerous movement that began two months ago, launching demonstrations in support of black victims of police violence in the United States, and demanding defunding, or completely abolishment of the police.

Here it is a bit a history trivia for all those watching this outrage: As parts of Europe fell to the occupying Red Army after WW2, who were the people executed first in the unraveling Communist takeover? Answer: The police and every former government member who dared to resist the KGB. So dear friends, “choose wisely” our new leader this November, since there are unmistakable parallels with political and financial events dating back more than 100 years that the so called Antifa/BLM “protesters” are really the avant-garde of the forces that would turn our country into the US of USSR, with the gulags included free of charge. Take at peek at the “Communist International” marching song: “Avanti popolo, bandiera rossa, alla riscossa, bandiera rossa, trionfera”.

President  Trump disclosed during an afternoon press conference that he will “immediately surge federal law enforcement” to Chicago, Illinois, following the recent uptick in gun violence in the city.

“No mother should ever have to cradle her dead child in her arms just because politicians refuse to do what is necessary to secure their neighborhood and to secure their city,” the president said while delivering remarks on “Operation Legend: Combating Violent Crime in American Cities” in the White House East Room on July 22.

.
A vaccine labeled CoronaVac, developed by Chinese pharmaceutical firm Sinovac against COVID-19 entered the final stage of testing in Brazil, being the last hurdle before regulatory approval,  with third-phase clinical trials involving between 300 and 3,000 participants who have the disease which the drug is meant to treat for “efficacy and monitoring of adverse reactions.”

“We’re living in unique and historic times, and that’s why I wanted to be part of this trial,” a 27-year-old doctor who received the first dose at the Clinical Hospital of Sao Paulo, as 9,000 health care workers across the country will receive the vaccine in two doses over the next three months.

The death toll from the coronavirus infection in the world went up again to 615,754, with total infections over 14.9 million cases recorded, and over 8.43 million of those patients were cured, with

The number of confirmed COVID-19 cases in Brazil has increased by 41,008 to 2,159,654 within the past 24 hours, the country’s national Ministry of Health said on Tuesday.

WHO Executive Director Michael Ryan said on 17 July that the coronavirus curve had plateaued in Brazil and that the country, which is only surpassed by the US in terms of total cases and deaths, could now push the disease down.

“Pockets of the original, so-called ‘migrant caravan,’ which press reports indicate consists mostly of Honduran nationals, have begun to arrive at our southern border with the intent of claiming asylum. These individuals—and their smugglers—ignored the will of the Mexican government to allow them to stay in Mexico.

“Let today’s message be clear: our nation has the most generous immigration system in the world, but this is a deliberate attempt to undermine our laws and overwhelm our system. There is no right to demand entry without justification. Smugglers and traffickers and those who lie or commit fraud will be prosecuted to the fullest extent of the law.

“Promoting and enforcing the rule of law is essential to protecting a nation, its borders, and its citizens. But, as President Trump has warned, the need to fix these loopholes and weaknesses in our immigration system is critical and overdue.

“Accordingly, I have directed our U.S. Attorneys at the border to take whatever immediate action to ensure that we have sufficient prosecutors available. I have also directed that we commit any additional necessary immigration judges to adjudicate any cases that may arise from this ‘caravan.’”

The DPRK’s leader Comrade Un has done the “impossible”, by sending a message to the United States expressing his willingness to open access to the International Atomic Energy Agency and allow access to North Korea by international inspectors to verify the reclusive state’s denuclearization.

The burning question now is as follows: It has been clear for some time that Comrade Un is just a silk glove, with the steel hand inside that of the newly self-crowned “Cult of Personality”, “21st Century Communist Doctrine” man aka incomparable President of China Mr.Xi, hence is this one step back, earning waiting time to get rid of President Trump, and then two steps forward again in the relentless fight against “Capitalistic Evil Incarnate”, the United States that is? Just today Mr.Xi preached for people young and old to read the “Communist Manifesto”, clearly indicating that he ain’t holding a Sunday liturgy mass in some peaceful town in eternal America.

A ni-Vanuatu boy named Kaltaliu Kalotiti who gained online attention after moving forward into the final stages of a local surfing competition with an old, duct-taped surfboard, has received an offer from New Zealand for a new surfboard and more:

“Within a couple of minutes, I had an email from New Zealand Surf Magazine, who proposed to get him a surfboard and fly it across to Vanuatu,” Surfing Association President Stephanie Mahuk said.

Miracles happen every day, don’t they?

Oil prices hit $75, the highest level in nearly three and a half years, as fears mounted over the prospect of new US sanctions on Iran, to be decided by 12th of May of whether or not to abandon a nuclear deal and re-impose sanctions.

“All bets are off on the US staying in the nuclear agreement,” an oil futures analyst said, since Mr.Trump has indicated that unless European allies fix the “terrible flaws” in the accord, he will restore US economic sanctions on Iran, a move that can push oil prices up by as much as $5 a barrel.

Chinese President Xi Jinping said that China will deepen pragmatic cooperation with other Shanghai Cooperation Organization (SCO) member countries in defense and security to contribute to long-term regional stability and prosperity, at a group meeting with defense ministers from Russia, Kazakhstan, Pakistan, Tajikistan, Uzbekistan and the Kyrgyz Republic chief of the general staff of armed forces.

“We must take safeguarding regional security and stability as the SCO’s work priority as always,” he said.