Voting starts in Virginia TODAY, and we are going to WIN. You have a crazy Governor who wants to take away your guns, which he will do without me in office. He is in favor of executing babies after birth – this isn’t late-term abortion, this is a step way beyond! Vote for me…
4.8K
6.8K
19.8K

Happy Birthday to our GREAT 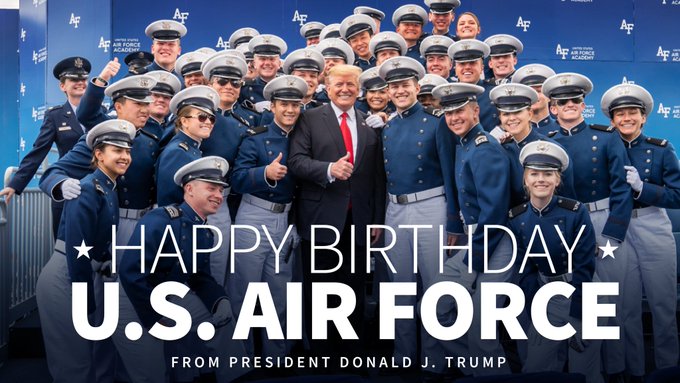 On National POW/MIA Recognition Day, The

and I honor the men & women of our Armed Forces who have selflessly served our Country & made tremendous sacrifices to defend our liberty. Our Nation remains committed to accounting for all missing Americans.

Proclamation on National POW/MIA Recognition Day, 2020 | The White House
Throughout our Nation’s history, America’s sons and daughters have heroically safeguarded our precious freedoms and defended the cause of liberty both at h
whitehouse.gov
5.5K
7K
21.4K
.

.
A “heat ray” gun, aka Active Denial System (ADS), that induces the feeling of boiling skin, tear gas, “stinger” grenades, rubber bullets and even more powerful weapons were sought by military police, as they moved to disperse peaceful protesters in Lafayette Park on June 1 prior to a photo op outside a church by President Trump, as an email from the National Capital Region’s lead military police official said the ADS “can provide our troops a capacity they currently do not have, the ability to reach out and engage potential adversaries at distances well beyond small arms range, and in a safe, effective, and nonlethal manner.”

It also revealed that a stockpile of M4 carbines – special assault rifles adapted from the M16 for use by special forces, the dispersal being the beginning of a night of violent crackdowns on demonstrations across the US’ capital city in which police cornered dozens of protesters in a narrow side-street and tear-gassed them and national guardsmen “buzzed” protesters with helicopters by flying just 50 feet over their heads.

The continuing investigation of the attack on Russian opposition leader Alexei Navalny took a new, and not surprising turn, as Novichok nerve agent was detected on an empty water bottle from his hotel room in the Siberian city of Tomsk, suggesting he was poisoned there and not at the airport as first thought, as laboratories in Germany, France and Sweden have established he was poisoned by a compound, a deadly poison developed by the Soviet military, though Russia naturally denies this by countering  it has seen no evidence.

A video posted on Mr. Navalny’s Instagram account showed members of his team searching the room he had just left in the Xander Hotel in Tomsk on August 20, an hour after they learned he had fallen sick in suspicious circumstances:

“It was decided to gather up everything that could even hypothetically be useful and hand it to the doctors in Germany,” the post said.

“The fact that the case would not be investigated in Russia was quite obvious.”

.
4…………> COVID-19: WHO Warning Europe Over Surge
.
Surging coronavirus figures across Europe should serve as “a wake-up call”, the World Health Organization’s regional director has said, as in the past two weeks the number of new cases had doubled in more than half of European member states:
“We have a very serious situation unfolding before us. Although these numbers reflect more comprehensive testing, it also shows alarming rates of transmission across the region,” he told reporters.
Mr. Kluge said the figures “should serve as a wake-up call for all of us”.
According to the WHO, there have been five million confirmed cases and more than 228,000 fatalities across Europe since the pandemic began.

In the rapidly descending into chaos Belarus, six weeks since the crooked election of President Alexander Lukashenko, daily demonstrations against him have spilled into clashes with security forces, with more than a thousand people been detained,  and stories emerging of being tortured by masked men wearing clothes that give no indication of who they are, and what organization they belong to .

Fed up with the brutal harassment, this week female protesters have started taking matters into their own hands, trying to identify the men and make them accountable for their actions.

Disclosure: European Union laws require that visitors from its domain be given information about cookies used and data collected on our blog. In many cases, these laws also require that they need to consent to the use of cookies.

“The Internet allows foreign adversaries to attack America in new and unexpected ways. Free and fair elections are hard-fought and contentious. There will always be adversaries who work to exacerbate domestic differences and try to confuse, divide, and conquer us,” Deputy AG Rod Rosenstein said as a U.S. grand jury indicted 12 Russian intelligence officers for alleged hacking related to the 2016 presidential election, with all of the individuals worked for two units of feared Russia’s main intelligence directorate, the GRU.

He told reporters one of the GRU units worked to illegally acquire information while the other disseminated the stolen information through two online personas — “Guccifer 2.0” and “DCLeaks,” and the timing of the indictment is suspiciously released just a week before President Trump is to meet with Russia President Putin in Helsinki, Finland as the “Fake News” press wend bezerk back again on the “Russian collusion” lunatic train.

Air Force One landed at Stansted Airport in Essex, Islamic May’sdom of the UK where President Trump was greeted by International Trade Secretary Liam Fox, and then flew by helicopter to the U.S. ambassador’s residence in London.

Since mass protests are planned during Mr.Trump’s visit due to his extreme unpopularity in the UK and especially London Muslim community, where activists will fly an inflatable ‘Trump Baby’ balloon, he will largely avoid travelling around the capital and other major cities due to the anticipated protests and his meetings will take place at various country estates or palaces.

British police say they have found a bottle of the nerve pathogen Novichok that killed a woman named Dawn Sturgess, 44, after she came in contact with the toxin, and left her partner Charlie Rowley in a serious condition in Salisbury hospital.

“A small bottle was recovered during searches of Charlie Rowley’s house in Amesbury, and scientists have now confirmed to us that the substance contained within the bottle is Novichok,” counter-terrorism police said as
more tests were being carried out to try to establish whether it was from the same batch that contaminated former Russian spy Sergei Skripal and his daughter Yulia and inquiries were underway to establish where the bottle came from.

The following two U.S. citizens are among the alien smugglers who were arrested and charged with alien smuggling:• Elias Serrano, 42, with prior convictions for aggravated stalking, kidnapping, possessing a deadly weapon and possessing marijuana with intent to distribute; and • Jesus Briseno, 25, with prior convictions for escape from custody, possessing marijuana, assault/causing injury to family member, and driving while intoxicated. Additionally, agents arrested 117 illegal aliens, which included the following criminal aliens:• a 34-year-old Guatemalan with an outstanding warrant out of Florida for driving under the influence, and also charged with illegally re-entering the U.S. after deportation;• a 30-year-old Mexican with ties to a Mexican drug cartel was arrested for fraud and misuse of visas; and• a 32-year-old Mexican with convictions for child endangerment and driving while intoxicated, was arrested for illegally re-entering the U.S. after deportation.

Gold down to 1241.1 and USD/CHF down 0.99 due to President Trump setting tariffs on Chinese products. Translation? As the dollar goes down, we have to wait and see if the new Fed Chair Jerome Powell will continue pressuring gold and the Eurasian block with it down below $1000/oz in an economic WW3. Watch sell stop at 24,750.