With Universal Mail-In Voting (not Absentee Voting, which is good), 2020 will be the most INACCURATE & FRAUDULENT Election in history. It will be a great embarrassment to the USA. Delay the Election until people can properly, securely and safely vote???
145.8K
106K
166.3K

My friend Herman Cain, a Powerful Voice of Freedom and all that is good, passed away this morning. Herman had an incredible career and was adored by everyone that ever met him, especially me. He was a very special man, an American Patriot, and great friend. I just got off…
5.3K
5.7K
20.4K

…the phone with his amazing wife Gloria, daughter, Melanie, and son Vincent to express my deepest condolences to the entire family.

Melania and I loved Herman Cain, a great man. Herman, Rest In Peace! 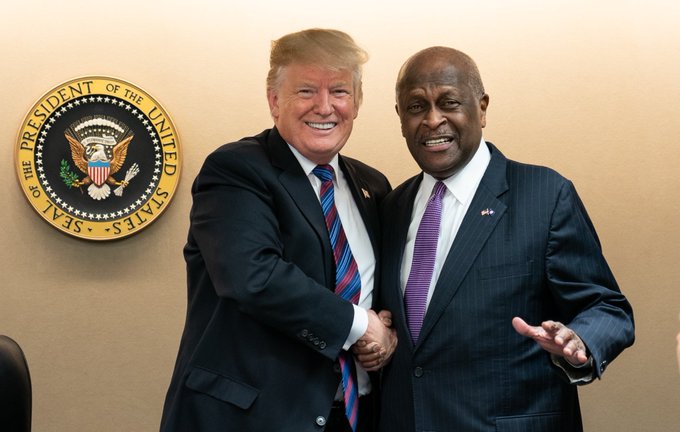 .
As the “Big Four” tech of Apple, Google, Amazon, and Facebook are testifying before Congress in the first hearing in an antitrust investigation into the dominance of digital platforms, President Trump divulged on Twitter that he would “bring fairness to Big Tech” himself by means of executive orders if the Congress fails to do so in the ongoing probe by the House Judiciary’s Antitrust subcommittee into the growing power of the digital platforms.

The congressional hearing was triggered by President Trump’ and his supporters allegations that the tech companies are politically biased against them, creating a liberal backlash by opponents accusing the companies of not doing enough to fight Trump’s claims, which they consider to be disinformation.

3…………>  The Central Banks New World’s Disorder: Is The Irreversible Collapse of Human Civilization Directly Ahead?

Humanity has less than a 10 percent chance of avoiding a collapse of civilization, according to a study  published by Professor Mauro Bologna of the Department of Electronic Engineering at the University of Tarapacá in Chile, and Dr. Gerardo Aquino, a research associate at the Alan Turing Institute in London, due to the rampant consumption of natural resources[promulgated by the relentless money printing by Central Banks(bibi1581.com comment)]. The authors of the report created a model, which estimated that with the current rate of deforestation there will be no forests in approximately 100-200 years:

“It is highly unlikely to imagine the survival of many species, including ours, on Earth without [forests]. The progressive degradation of the environment due to deforestation would heavily affect human society and consequently the human collapse would start much earlier”, wrote Dr. Aquino and Professor Bologna.

“In conclusion our model shows that a catastrophic collapse in human population, due to resource consumption, is the most likely scenario of the dynamical evolution based on current parameters…. we conclude from a statistical point of view that the probability that our civilization survives itself is less than 10 percent in the most optimistic scenario. Calculations show that, maintaining the actual rate of population growth and resource consumption, in particular forest consumption, we have a few decades left before an irreversible collapse of our civilization”, wrote the authors of the study.

.
“Fake News” or not,  the wild speculations about Trump’s plummeting poll numbers which threaten to ruin the Republican Party’s bid to keep control of the US Congress, are re-arranging the force fields of the political science pundits who have been brain gambling on whether the GOP should abandon the president, and seeking a new replacement as his successor.

‘Is Dissent is Growing Among GOP Politicians’ ?
“The key to understanding this is to recognize that Trump is not a party politician”, says Dr. Mark Shanahan, associate professor and head of the Department for Politics and IR at the University of Reading, in the Islamic Sheikdom of UK.

“From 2016 to early 2020, the Republican Party was happy to hitch its wagon to his horse since he was, as he would put it, ‘winning’”.
In an attempt to galvanize never-Trump Republicans and GOP voters disenchanted with the president’s domestic and foreign strategy, about 200 GWB supporters created a group supporting the election of “Uncle” Joe, “Sleeping in a wrong century” Biden.

“Today, we have extended Operation Legend to Cleveland, Detroit and Milwaukee, three cities that have seen disturbing increases in violent crime, particularly homicides”, US Attorney General William Barr said in the release.
The move comes as hundreds of federal agents were sent to Chicago, Albuquerque, and Kansas City following a spike in homicides and other violent crimes that started following massive protests over racial discrimination and police brutality.

Interesting how ANTIFA and other Far Left militant groups can take over a city without barely a wimpier from soft Do Nothing Democrat leadership, yet these same weak leaders become RADICAL when it comes to shutting down a state or city and its hard working, tax paying citizens!
31.8K
36.2K
120.1K

Does anyone notice how little the Radical Left takeover of Seattle is being discussed in the Fake News Media. That is very much on purpose because they know how badly this weakness & ineptitude play politically. The Mayor & Governor should be ashamed of themselves. Easily fixed!
23.5K
27.2K
94.9K

Groups from around the Islamic Sheikdom of UK, including right-wing activists, declared their support for protecting statues of great Englanders.

.
Around 15,000 people took to the streets of the capital of the Islamic Sheikdom of France Paris to protest against police brutality, inspired by America’s Black Lives Matter movement, organized under the banner “Justice for Adama”, after Adama Traoré, a young black man who died in French police custody in 2016. The country’s president, Grand Rabbinical Ayatollah Emmanuel Macron has promised new measures to erase any discrimination against citizens of color.

US protests were sparked by the death of George Floyd, an African American man killed on 25 May by a white Minneapolis policeman who knelt on his neck for almost nine minutes.

.
Ms. Emma Soames, Sir Winston Churchill’s granddaughter, who’s grandpa was UK Prime Minister from 1940 to 1945, the brave visionary who led the country during the Second World War,          has wondered openly about the plight of Egypt’s pyramids, and also suggested the bronze monument to Churchill in London’s Parliament Square might “be safer in a museum”.

As hundreds of Black Lives Matter and pro-statue protesters & other assorted hoodlums rallied in cities across the Islamic Sheikdom of UK, a statue of Winston Churchill in Parliament Square, earlier desecrated and spray-painted with the words ‘was a racist’, was boarded up by London Mayor Sadiq Khan over concerns it might become a “flashpoint for violence”.

“He was a powerful, complex man with infinitely more good than bad in the ledger of his life… Until now, he was regarded as the savior of this country and one of [its] greatest democrats and parliamentarians. That is why the statue is there,” said Soames.

“I mean, if you’re going to be utterly purist and blinkered about Black Lives Matter, where does that leave the pyramids in Egypt, for instance?” queried Soames.
Archaeologists tend to stick to the theory that that the pyramids in Giza were built by paid laborer, yet some believe they were constructed using slave labor.

A team of scientists have conducted a spate of excavations at a previously unknown site in Mexico, called Aguada Fénix, a​ structure raised around 1000 B.C. to 800 B.C., the site located in part on Rancho Fénix (Phoenix Ranch) in Tabasco, Mexico, at the western edge of the Maya lowlands.

Due to the presence of artificial reservoirs, called aguadas, in the area, the researchers dubbed the site Aguada Fénix., and scientists estimated this platform took hundreds of million cubic feet

to build, with nine causeways radiate from the platform, with the longest these stretching 18 miles.

As for the purpose of the platform, the team of scientists believes it was “used for rituals involving lots of people.”