Researchers have found a scientific proof on what Bernie “Spendie” Sanders said during the US presidential campaign: a phenomenon of correlation  of temperature deviation from 20C mean in food growing areas of 103 countries, leading to sharp increases in the numbers of those seeking asylum in the European Union.

Econometric models suggest that 660,000 extra applicants would be expected to apply each year by 2100, if current temperature trends continue.

After a deadly train crash in the US state of Washington, which resulted in three fatalities, President Trump said his “soon to be submitted” infrastructure plan must be approved quickly, a good start of bipartisan cooperation between Republican and Democratic lawmakers.

He also emphasized the need to invest money in the United States after having spent trillions of treasure abroad.

President Trump’s executive order directing federal agencies to do whatever is needed to suppress opioid epidemics is very timely indeed.

“We do occasionally see a one-year dip, even that doesn’t happen that often, but two years in a row is quite striking. And the key driver of that is the increase in drug overdose mortality. If you look at the other developed countries in the world, they’re not seeing this kind of thing. Life expectancy is going up,” Robert Anderson, chief of the mortality statistics branch of the Center for Health Statistics said about the observation that life expectancy in the US has dropped, while the rest of the world keeps on climbing, West Virginia being US leader with 52 people for every 100,000 died of an overdose,followed by Ohio, New Hampshire, Pennsylvania and the city of Washington, DC. All four see some 38 overdose deaths out of every 100,000 deaths.

The unique and colorful people in the stone jungle of Spanish Harlem as immortalized in the art of Joseph Rodriguez.

Gold up to 1278.8 and USD/CHF up to 0.9887 due to tax bill passage.  Translation? As the dollar goes down, we have to wait and see if the new Fed Chair Jerome Powell will continue pressuring gold and the Eurasian block with it down below $1000/oz in an economic WW3. Watch sell stop at 24,600. We have to wait and see if new Fed chair Powell will attempts to destroy Eurasian block by sending gold prices below 1000, despite the fact both Russia and China have been buying their whole gold production in local gold backed currency instead of money printing machines. In other words, US has lost controls of the precious metals complex, and with Trump’s infrastructure and tax cut campaign the National debt will soon be at, or over 30 trillion dollars, since D.C. swamp alligators have no intention dropping their pet projects. Read “Ziban Must Die” for more details on the coming collision of Trump’s administration with “Deep State” operators funded by the billionaires supporters of the New World Disorder.

Citizens of Los Angeles were stunned by a fiery show and glowing clouds of a mysterious object that flew over the ocean, separating a burning star within a nebulous cloud, and then continued raising in the heavens. It was was later claimed that it was a SpaceX rocket on a mission 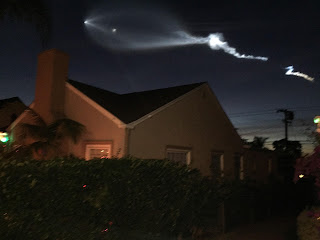 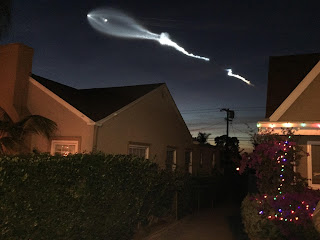 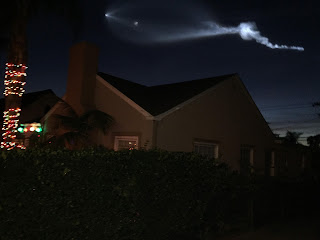 to put a satellite in orbit, take your pick on that.