Vote for TRUMP on November 3rd. I am going to bring our beloved New York back!
Quote Tweet 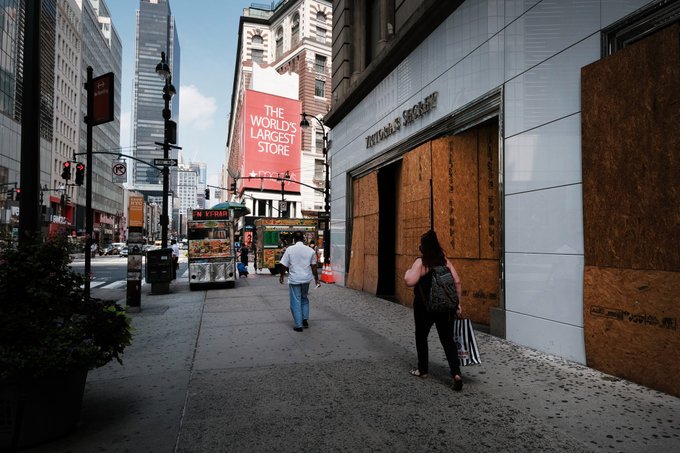 The 38-year-old illegally present Mexican national is wanted in Oaxaca, Mexico, for the 2010 murder of his wife, and after HSI Richmond received information indicating Ignacio-Flores was residing in the Richmond-area under an assumed identity, From there, HSI partnered with its ERO counterparts to locate and arrest him.

“The joint efforts of HSI special agents and ERO officers led to the arrest of a dangerous individual who had illegally sought safe haven in central Virginia,” said Raymond Villanueva, special agent in charge of HSI Washington, D.C.
The U.S. Border Patrol previously encountered Ignacio-Flores in April 2011 at or near the Laredo Port of Entry in Texas and granted him voluntary return to Mexico. He illegally reentered the U.S. at some point thereafter. ICE records indicate he has a DWI conviction from May 2014, along with two convictions for driving without a license from July and September 2014.

Millions of Americans, including Democratic presidential candidate “Uncle” Joe, “Sleeping in a wrong century” Biden, and his prospective VP candidate Ms. Kamala Harris, sent their deepest condolences to Mr. Trump for losing his younger brother Robert, aged 71, who died after being hospitalized in New York:

“It is with heavy heart I share that my wonderful brother, Robert, peacefully passed away tonight,” Mr. Trump said in a statement.

“He was not just my brother, he was my best friend. He will be greatly missed, but we will meet again. His memory will live on in my heart forever. Robert, I love you. Rest in peace.”

He said his brother was “having a hard time” with an undisclosed illness, and the cause of Robert Trump’s death has not been revealed.

.
The “Deep State” whistleblower Edward Snowden, a former Central Intelligence Agency (CIA) employee who revealed the illegal spying practices conducted by US intelligence agencies, and has been living in Russia since 2013, while wanted in the United States on charges of espionage and treason, has caught the eye of President Trump, who said that he was “going to look at it”, when asked about the possibility of pardoning him:

“There are many, many people. It seems to be a split decision. The many people think that he should be somehow treated differently. And other people think he did very bad things. And I’m going to take a very good look at it. I have seen people that are very conservative and very liberal and they agree on the same issue and they agree both ways”, Trump said.
Snowden, who has been in Russia since 2013, submitted documents for extending his Russian residence permit by three more years in April 2020.

.
Millie Weaver, a conservative journalist from Infowars, and a host of the Millennial Millie YouTube channel, was just about to reveal her investigation into the US “Shadow Gate” in her new documentary, when she and her husband were taken into custody while accused of “burglary”, and is heard asking a police officer outside of her house whether she has been “indicted” by a “grand jury”:

“Guys, I don’t know what’s happening right now, police just showed up in my house and they said that they are arresting me. Guys, I’m literally about to break huge breaking news right now and I’m being arrested”, Weaver then adds.
It then can be heard that she was taken into custody as charged with “burglary”.

Weaver’s “Shadow Gate” investigative documentary exposing the “Deep State” operations of the US intelligence community based on the reports of two intelligence whistleblowers was about to premier online, and is now available on YouTube.