Biden staffers rush the press out of the room before Joe Biden can answer any questions
3.9M views
0:00 / 0:19

“Congress has only itself to blame for this mess. The post office is meant to be self-sufficient, but it hasn’t broken even for years. A misalignment like this wouldn’t last in private business, but the Postal Service answers to politicians.”
Quote Tweet

Mr. Trump has repeatedly said that mail-in ballots will lead to voting fraud – and give a boost to his rival Democrat, “Uncle” Joe, “Hiden” Biden, but opposition “experts” say the mail-in voting system – which is used by the American military and by Mr. Trump himself – is safe from tampering, still the President continued blocking additional funding for the USPS to help with election issues.

The US Postal Service (USPS) has warned that millions of mail-in votes may not arrive in time to be counted on the presidential election day, 3 November, saying in supporting letters to states across the country last month, that  the agency said “certain deadlines… are incongruous with the Postal Service’s delivery standards”.

Meanwhile, Congress’s two top Democrats – Nancy, “No, Amy is not my daughter” Schumer, and Chuck, “I cried tears for the Muslims” Pelosi, told the president to stop his “assault” on the postal service, and “allow the 2020 election to proceed without his sabotage tactics”, a statement contradicted by USPS General Counsel Thomas Marshall who said a “mismatch” between Pennsylvania’s laws and the mail system’s delivery capabilities “creates a risk that ballots requested near the deadline under state law will not be returned by mail in time to be counted under your laws as we understand them”.

.
Since selected as “Uncle” Joe, “Hiden” Biden’s running mate, Kamala Harris has been named by several Trump hating media outlets, as either “moderate” or “centrist”, leading the former speechwriter for our beloved 1st Muslim President, Grand Ayatollah Barack, “We must spread freedom around the world by reading our citizens email” Obama, “May Allah Shadow fall upon him”, Jon Favreau, to ridicule media outlets for posing Joe Biden’s running mate Kamala Harris as “moderate” in an episode of podcast “Pod Save America”.

“It was hilarious to me that she’s being called, in all this coverage, a ‘moderate,’ like Joe Biden has found a fellow moderate or centrist. She supports something extremely close to ‘Medicare for All,’ which Bernie Sanders acknowledged in his statement supporting her. She’s for the Green New Deal. She has one of the most liberal records in the US Senate,” Favreau said.

His sarcastic remark was caused by several publications in US media, including The New York Times, The Washington Post and others. The NYT suggested that Harris is “a pragmatic moderate who spent most of her career as a prosecutor”, with descriptions like “a natural centrist” from The Economist and “relatively centrist” from the Associated Press.

.
A US Navy Chief Information Systems Technician Charles T. Briggs is facing court-martial on charges associated with allegedly passing classified information to a Russian national in 2018 and 2019, while he was stationed at US Strategic Command headquarters in Nebraska, and if convicted, may have to spend some 64 years in prison, which include transmitting classified information to a Russian national “with reason to believe the information could be used to injure the United States or benefit a foreign nation.”

Other accusations include another document transfer to a Russian national between October 2018 and January 2019, and lying on several security clearance questionnaires about not having a “close and continuing relationship” with someone who isn’t a US citizen or who requested future contact.
He is also charged with obstructing justice for allegedly telling his Russian contact about an “ongoing investigation into their relationship” in January and February 2019.

George Sorbane Quotes: ” The truth is like a septic tank and the smell will eventually get out no matter how hard we tighten down the hatch”, The Endless Beginning.T

How we’re backing up Pennsylvania: 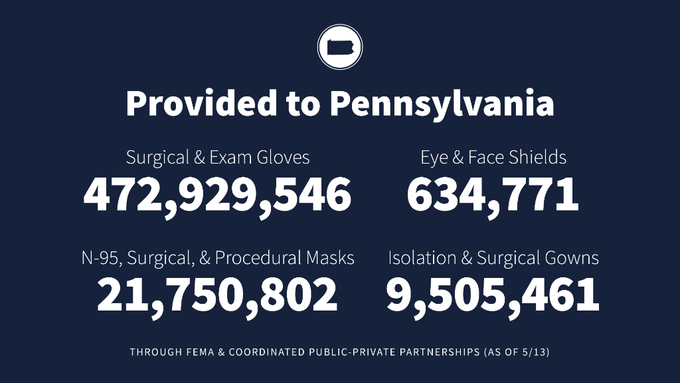 It’s been said that 90% of life is showing up because when you show up, people know that you care. Thank you

for making PA a priority. We have received millions for #COVID19 testing in our state, critical PPE & other supplies. These actions saved lives!

for ensuring Pennsylvania has the testing capabilities we need to combat #COVID19.

The Federal Bureau of Investigation, Cybersecurity and Infrastructure Security Agency (Cisa), a division of the homeland security department, issued a joint warning disguised as a public service announcement, alleging “healthcare, pharmaceutical and research sectors working on Covid-19 response should all be aware they are prime targets” of hackers, as cyber-criminals had “been observed attempting to identify, and illegally pirating-out “precious intellectual property and public health data” on treating the coronavirus, while repeatedly denying US accusations of cyber-espionage:

“We are leading the world in Covid-19 treatment and vaccine research. It is immoral to target China with rumors and slanders in the absence of any evidence,”  foreign affairs ministry spokesman Zhao Lijian said.

This did not quell the suspicions of President Trump referred to China’s alleged cyber-activities:

“What else is new with China? I’m not happy with China, could have stopped it at the source, should have.”

The FBI has arrested a researcher for NASA, identified as Simon Saw-Teong Ang, a 63-year-old Arkansas professor who reportedly did not disclose his connections to the Chinese government and other Chinese entities:

​“In the one-count complaint, Ang was charged with one count of Wire Fraud. The complaint charges that Ang had close ties with the Chinese government and Chinese companies, and failed to disclose those ties when required to do so in order to receive grant money from NASA” the DoJ wrote in a May 11 news release.
“These materially false representations to NASA and the University of Arkansas resulted in numerous wires to be sent and received that facilitated Ang’s scheme to defraud.”

The DoJ claims that the electrical engineering professor, who has worked at the University of Arkansas-Fayetteville since 1988, committed fraud against the university and NASA “by failing to disclose that he held other positions at a Chinese university and Chinese companies.”

“You can search the Chinese website regarding what the US will do to Thousand Talent Scholars,” Ang wrote, the complaint obtained by CNN says. “Not many people here know I am one of them but if this leaks out, my job here will be in deep troubles (sic).”

A man from Water Valley, Texas, was sentenced today to serve 60 years in prison for producing hundreds of videos and images of himself sexually abusing a child.

Douglas Stephen Groover, 37, was sentenced after pleading guilty in February 2020 to two counts of production of child pornography. The sentence, which was imposed by U.S. District Judge James Wesley Hendrix of the Northern District of Texas, also included a lifetime term of supervised release and a restitution award of $53,000.

5…………> Ousted US Scientist Warning: We Face The ‘Darkest Winter’

.
The pandemic will get worse in the US unless there is a national response based on science, Dr. Bright warned, but  Mr. Trump has dismissed him as a ‘disgruntled guy’, despite Dr. Fauci advice that a premature lifting of lockdowns could lead to additional outbreaks of the deadly coronavirus, which has killed more than 82,000 people, representing one-fourth of global deaths.

“To me it’s not an acceptable answer, especially when it comes to schools,” Mr. Trump said.

The President said the only thing that would be acceptable would be professors or teachers “over a certain age” not holding classes.

“I think they ought to take it easy for another few weeks,” he said.

Mr. Trump — who had made the strength of the economy central to his pitch for re-election in November — has encouraged states to reopen businesses and schools shut to slow the spread of COVID-19.