45th President of the United States of America

Followed by Ananthapathmanabhan A, Prince Abd Elwahed, and 255 others you follow 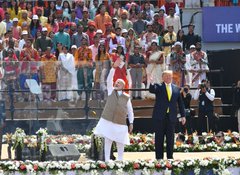 During his speech at the #NamasteTrump programme, @POTUS @realDonaldTrump highlighted aspects of his vision for USA. He also spoke at length about India’s greatness as well as the greatness of our culture, ethos, people and more. I thank him for his kind words

Great new book just out, “Taken for Granted, How Conservatives Can Win Back Americans That Liberalism Failed”, by Gianni Caldwell, a young winner! He will be at the Ronald Reagan Library, Simi Valley, California, on Thursday at 6 PM, PT. Check it out!
Donald J. Trump Retweeted

“The Republican Party has nearly eight times as much cash-on-hand as the Democratic Party in the heat of the 2020 primary season.”

Republican Party war chest dwarfs Democrats’ going into 2020 high season
The Republican Party has nearly eight times as much cash-on-hand as the Democratic Party in the heat of the 2020 primary season.
foxnews.com
Who to follow
Barry Michaels For U.S. Senate and 2 others follow

Dan Scavino
@DanScavino
Personal accunt. Currently serving as Assistant to the President and Director of Social Media at the White House. For official announcements, go to
@Scavino45

, I lived and went to school in #Cuba for 15 years. You have NO IDEA of you are talking about. Not in the 1980s, and not now. The Cuban regime does not offer education, it gives free indoctrination.

continues to deliver for Cubans. #KAG

From wanting to nationalize America’s major industries to banning fracking which could gut nearly 15 million jobs, Bernie Sanders’ ideas, which have been adopted by the rest of the Democrat field, are a danger to America and to our way of life.

“Me Too” leaders Rose McGowan  & Ashley Judd celebrated the conviction of Hollywood “Ultimate” pervert, one of few destined to get even close to the infamy of the late financier Jeffrey Epstein, Clinton & Co, and lived to see justice, having his ass sentenced to up to 25 years in prison.

The 67-year-old was handcuffed in court after being convicted by a New York jury of sexually assaulting former production assistant Mimi Haleyi in 2006 and raping then-aspiring actress Jessica Mann in 2013, as the verdict has been hailed as a milestone for the #MeToo movement that inspired women to go public with misconduct allegations against powerful men.

Rose McGowan, who said her career as an actress was ruined by her allegations of rape against Weinstein dating back to 1997, had previously she was “dreading” the trial, welcomed the conviction, referring to it as “taking out the trash”.

The golden saxophone, thought by many to be the voice of the “black people”, has always been an object of controversy,  offending ideologues, angering dictators like Hitler, Stalin, the Vatican and more, been outlawed around the world — but it’s only grown in strength.

The remarkable instrument was created in 1841, when young Belgian inventor Adolphe Sax had “out of the box” idea of putting the reed of a woodwind instrument on a brass body, sounding like a trumpet, but the emotional softness of a flute, military bands loved it — but an established industry of instrument-makers most certainly did not.

By 1933, when the Nazis took power in Germany, the saxophone had become a symbol of jazz music and inextricably intertwined with African-American culture.

The instrument fell under what Nazis referred to as “Entartete Kunst”, or “degenerate art”, which saw many artforms banned.

One 1938 poster advertising a “degenerate music” exhibition featured a black, monkey-like caricature, wearing a Star of David badge and playing the saxophone.

During CBS ‘60 Minutes’ interview the leading candidate for the Democratic nomination to face President Trump, Senator Bernie,“Spendie” Sanders fired some comments about the late Cuban leader Fidel Castro that ignited a furious barking from all his competitors, for saying that regardless of his personal opposition to “the authoritarian nature of Cuba”, it’s “unfair to simply say everything is bad” under the rule of Fidel Castro.

Vice President Joe,”Sleeping in a wrong century” Biden’s campaign spokespersons suggested that Sanders’ comments were “deeply offensive” to people in the US that have fled political oppression, while Indiana Mayor Ms. Pete Buttigieg compared the idiotic statement above to that of President Trump’s policies during the last few years:

“After four years of looking on in horror as Trump cozied up to dictators, we need a president who will be extremely clear in standing against regimes that violate human rights abroad. We can’t risk nominating someone who doesn’t recognize this,” Buttigieg tweeted in Spanish and English.