Cold rain, snow and lots of Trump supporters. Despite the miserable weather, there are already more people lining up outside the venue of

‘s rally tonight than you see at most of the events for the Democratic candidates. Some have been out here all night 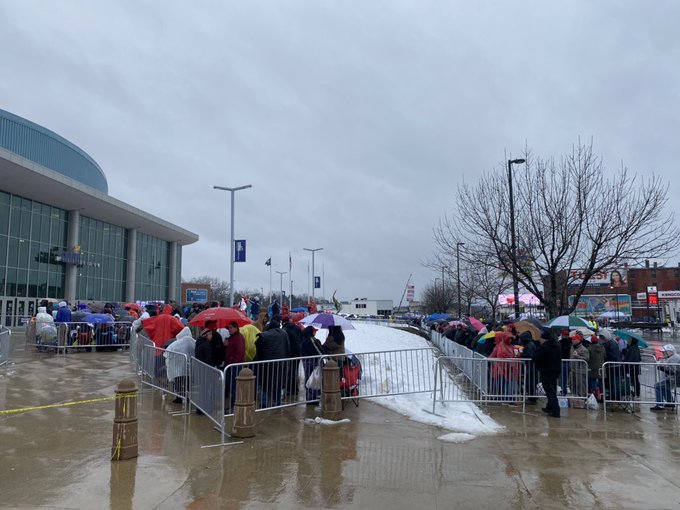 I don’t know who the heckler is…but he is my hero! Nadler was rattled!

One of the best things to come from the election of @realDonaldTrump…was that he woke up the silent majority and showed America how to take the fight to the enemy!

has accomplished Great Things for America! Thanks

for summarizing the exponential achievements of this

for a Christian Voice.

@mirandadevine
The people are happy with President Trump and they see how poorly he is being treated.

Attorney General William Barr calling the hack “one of the largest data breaches in history”, announcing that the US has charged four Chinese military officers over the huge cyber-attack on credit rating giant Equifax, as more than 147 million Americans were affected in 2017 when hackers stole sensitive personal data including names and addresses, with some UK and Canadian customers were also affected.

The four hackers are members of the People’s Liberation Army’s 54th Research Institute, an unit of the Chinese military, and spent weeks in the company’s system, breaking into security networks and stealing personal data, stealing trade secrets including data compilation and database designs.

FBI Deputy Director David Bowdich said: “We can’t take them into custody, try them in a court of law, and lock them up – not today, anyway.”

Storm Ciara swept across the UK on Sunday, with heavy rain and gusts of up to 97mph causing widespread flooding and major disruption on the transport network.

Ms. Pete Buttigieg, the youngest presidential candidate running, a graduate of Harvard and Oxford University, former Navy Reserve intelligence officer, and currently the 32nd mayor of South Bend, Indiana, is rising star among moderate Democrats, while Joe, “Sleeping in a wrong century” Biden is losing steam, getting dangerously confused and acting stupid, the reason why Hillary, “I have no recollection of my email server” Clinton,  and our beloved 1st Muslim President, Grand Ayatollah Barack, “We must spread freedom around the world by reading our citizens email” Obama, “May Allah Shadow fall upon him” campaign donors are betting real money on the young Democratic dark horse.

“The first time I was here, few people knew me or how to pronounce my name. Now we’ve won the Iowa Caucuses and we’re just 5 days away from the New Hampshire Primary”, Ms. Buttigieg tweeted ahead of taking the stage at a CNN Town Hall.

The 38-year-old ex-mayor of South Bend, Indiana, and the first openly gay presidential candidate, has won the Iowa caucuses in a tight contest with former Democratic heavyweight Bernie, “Spendie” Sanders.

5…………>  China  Goes Back To Work: Despite Corona-Virus Battle

The China’s State Council urged efforts to protect workers from getting infected, and meanwhile resume production as soon as possible, carefully controlling the corona-virus epidemic, while minimizing its impact on the economy as millions of people head back to work after a mandatory extended holiday.

Companies providing epidemic control supplies and services such as medical material and daily necessities are among the first groups to resume work and have already begun racing back to full capacity to fight the novel corona-virus outbreak, that first detected in central China’s city of Wuhan in December, forcing people indoors and led to a sharp increase in demand for protective equipment like masks and goggles.

About 73 percent of the country’s mask production capacity had been recovered by Friday, according to Chen Da, an official with the National Development and Reform Commission, the country’s top economic planner. For medical masks, the rate has gone up to 87 percent.

Despite that the virus epidemic  has killed 908 and infected more than 40,000 on the Chinese mainland by Sunday, Shanghai survey showed that more than 80 percent of the local manufacturing companies are willing to resume work, of which about 70 percent have already done so.

President Trump has stated that he would demand the country’s Justice Department probe into the FBI/DOJ meddling in the 2016 US presidential election upon the request of “people within the Obama administration” by taking on Twitter to draw a line in the reported FBI/Department of Justice’s involvement in 2016 presidential election.

“I hereby demand, and will do so officially tomorrow, that the Department of Justice look into whether or not the FBI/DOJ infiltrated or surveilled the Trump Campaign for political purposes, ” the president wrote on Twitter.

Trump has specified that he would also like to investigate whether this alleged surveillance or infiltration into the elections was carried out by some people from the administration of his predecessor, Barack Obama, after mocking “The failing” New York Times report concerning that alleged an Israeli-linked company manipulated the vote through social media, aiming to ensure Trump’s victory.

A leading Islamic Merkeldom of Germany daily fired a cartoonist over anti-semitic views after he drew a caricature of Israeli Prime Minister Benjamin Netanyahu carrying a missile in his hand, dressed up as Israeli singer Netta Barzilai, who won this year’s Eurovision contest, with a speech bubble on top says, “Next year in Jerusalem.”

The cartoon by Dieter Hanitzsch led to an uproar on social media and other German media outlets after the 85-year-old cartoonist said he wanted to criticize Netanyahu’s exploitation of the Eurovision contest for his own purposes and accused him of abusing the singer’s victory.

“You can reprimand him, warn him, but firing is not a good way,” he said.

Hanitzsch had drawn cartoons criticizing and even insulting Turkish President Recep Tayyip Erdogan but was defended on the basis of freedom of the press and expression, for his drawings published in the same newspaper.

With “minutes to midnight” the great US-China trade war appears to have been averted with the US deadline to impose tariffs on China set to expire on  Monday, after a deal has been struck with the Chinese agreeing to take measures to reduce its bilateral trade surplus, principally by buying more US goods.

“There was a consensus on taking effective measures to substantially reduce the United States trade deficit in goods with China,” a joint statement drawn up by both sides negotiators read.

“To meet the growing consumption needs of the Chinese people and the need for high-quality economic development, China will significantly increase purchases of United States goods and services. This will help support growth and employment in the United States”, the statement concluded.

The communique was light on detail, pointing more to a detente rather than a total end to hostilities, and done just before worlds market are about to open, preferably not on a large “downside gap”.

“This pay-for-removal scheme attempts to profit off of someone else’s humiliation. Those who can’t afford to pay into this scheme to have their information removed to pay the price when they look for a job, housing, or try to build relationships with others,” “Anti-Trump”, “Sanctuary Cities Supporting” State Of California Attorney General Xavier Becerra warned in a statement, followed by the arrest of the four owners of a website which publishes photos of people taken soon after they have been arrested, have been arrested themselves.

The alleged owners of the mugshots.com website have been accused of extortion and a variety of other crimes.

“We love our Royal family”, “Everything is changeable”, two remarks related to the colorful wedding of Prince Harry and his beautiful American wife Meghan Markle.