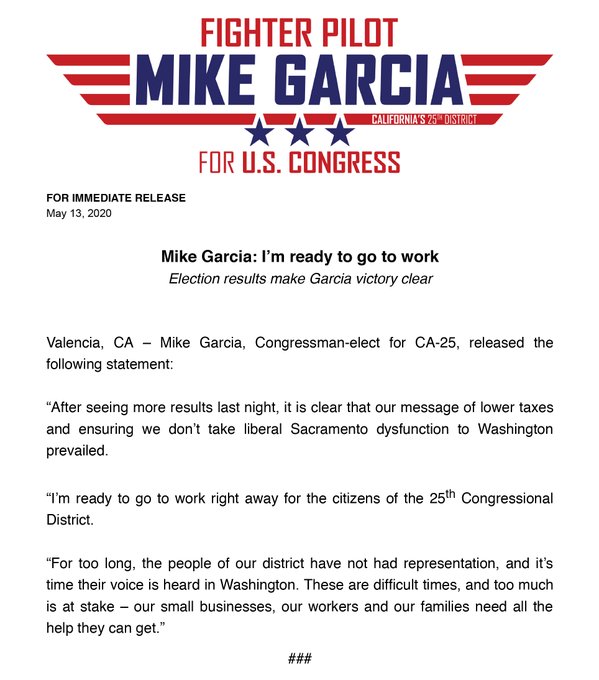 First time in 22 years. Mike will be a GREAT CONGRESSMAN!
Quote Tweet

Intel chief releases info on ‘unmasking’ of Flynn to Capitol Hill https://politi.co/3dIYUDa via

Apparently President Trump has not had the time to study why his infamous predecessor, and our beloved 1st Muslim President, Grand Ayatollah Barack, “We must spread freedom around the world by reading our citizens email” Obama, “May Allah Shadow fall upon him,” US House Speaker Nancy, “Anyone caught urinating in front of my mansion will be deported to Arizona” Pelosi, and his VP, Joe, “Sleeping in a wrong century” Biden could not propel Hillary, “I have no recollection of my email server” Clinton to the White House, even with help of her husband Bill, “I never had sex with that woman”, and their dear friends from the “Gay/Lesbian Freedom Liberation Front”.
As people of wisdom have said in the past, “watch the money trail, stupid”, and that is exactly what Obama was not watching, as his hench woman in the Federal Reserve, Janet Yellen committed the greatest bank robbery in recorded history by lowering the rates to zero, and robbing the savers out of trillions, mostly the seniors on fixed income, who in turn elected Trump, not because they were racist and deplorable as claimed, but simply because they were cut out of their fixed income stream.

“I’m a believer in negative rates … I feel strongly we should have negative rates,” he said.
Mr.Trump will be well by advised by Bi1581.com to stay away from this dangerous decision, since by election time he may not have enough supporters to push him over the finish line, precipitating an indescribable catastrophe, as Comrades Biden, AOC & Co march this country to its final, and sorrowful days.

The federal judge presiding over the criminal case against former White House national security adviser Michael Flynn has called upon a retired jurist to determine whether Flynn could be held in contempt of court for perjury, by pushing forward court’s acceptance of “amicus curiae briefs,” appointing retired federal judge John Gleeson as “friend of the court.”

Gleeson, a Clinton-era appointee to the federal bench in New York’s Eastern District, will present arguments “in opposition to the government’s “Motion to Dismiss” and on “whether the Court should issue an Order to Show Cause why Mr. Flynn should not be held in criminal contempt for perjury,” co-authoring a Washington Post op-ed entitled “The Flynn case isn’t over until the judge says it’s over,” which declares, “There has been nothing regular about the department’s effort to dismiss the Flynn case.”

While under oath, the retired US Army general has both confessed to lying to the Federal Bureau of Investigation (FBI) as well as denied lying to the FBI.

A Republican candidate won a congressional seat from the Democrats in liberal California for the first time in more than two decades, as Democrat Christy Smith conceded the special election to Republican Mike Garcia, a former Navy fighter pilot, a drastic change after losing the House of Representatives seat by nearly double digits in the 2018 midterm elections.

The election was held to fill Democrat Katie Hill’s seat after she resigned last year in a sex scandal.