and their 241,000 brave law enforcement members for a FULL & COMPLETE ENDORSEMENT! I will ALWAYS back the men and women in blue, and never let you down. LAW AND ORDER will prevail! #LESM

NAPO
@NAPOpolice
· 19h
NAPO has endorsed President Trump in his reelection campaign. Here is our endorsement letter which was issued following today’s meeting. 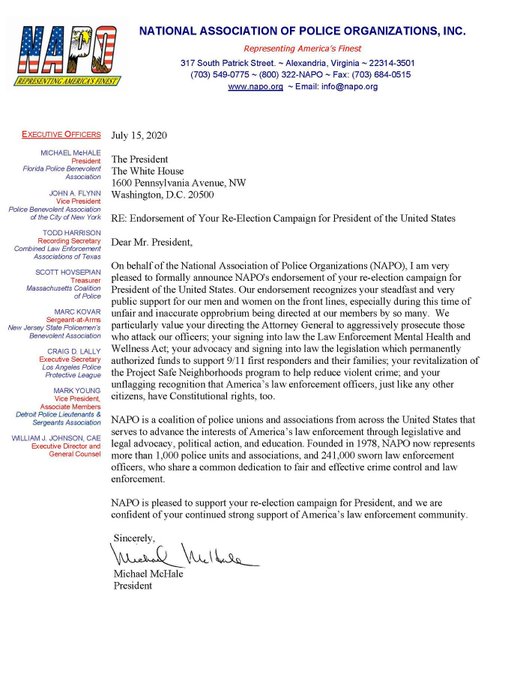 …campaign. Both were heavily involved in our historic 2016 win, and I look forward to having a big and very important second win together. This one should be a lot easier as our poll numbers are rising fast, the economy is getting better, vaccines and therapeutics will soon…
7.8K
15.1K
82.2K
Show this thread

I am pleased to announce that Bill Stepien has been promoted to the role of Trump Campaign Manager. Brad Parscale, who has been with me for a very long time and has led our tremendous digital and data strategies, will remain in that role, while being a Senior Advisor to the…
23.5K
25.8K
118.3K
Show this thread

A Florida surfer’s camera captured a video of three sharks swimming beneath her board while she surfed at New Smyrna Beach, a surfing hub south of Daytona Beach.

The footage shows the silhouettes of three sharks underneath Lindsey Baldwin as she surfs.

​“My 3-year-old has been getting really into surfing and I wanted to see if my old GoPro still even worked so I took it for a spin, and that was the first wave I caught,” Lindsey Baldwin said.

Baldwin, who has been surfing since she was 5 years old, was able to maneuver from side to side on her surfboard to avoid the sharks. 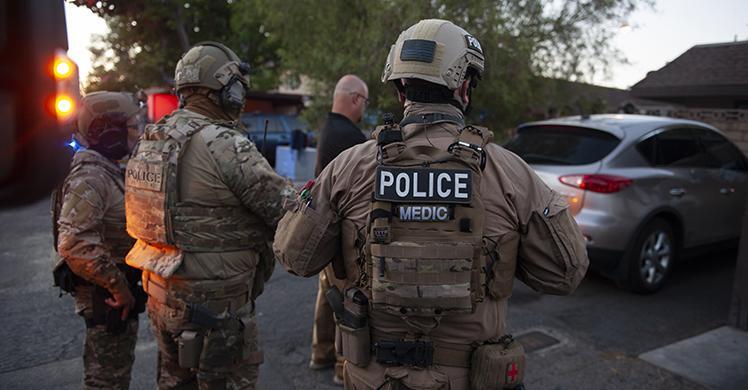 An investigation led by U.S. Immigration and Customs Enforcement’s (ICE) Homeland Security Investigations (HSI) Las Vegas resulted in the criminal arrest of 11 members and associates of MS-13 Tuesday in Las Vegas, Nevada, and Los Angeles, California. Another six MS-13 members and associates were also arrested on administrative charges, with criminal charges pending in five of the six cases, for a total of 17 MS-13 arrests made Tuesday in the two cities. HSI was greatly assisted by the Las Vegas Metropolitan Police Department (LVMPD) and the Bureau of Alcohol, Tobacco, Firearms and Explosives (ATF). The indictment of 13 individuals was unsealed Wednesday in the United States District Court for the District of Nevada.

During the operation, HSI seized five pounds of methamphetamine, $28,000 in cash, 14 firearms (9 long arms and five handguns), and six suppressors.

President Donald J. Trump announced the results of this multiyear investigation in the Oval Office Wednesday with the heads of various law enforcement agencies, including ICE Deputy Director and Senior Official Performing the Duties of the Director Matthew Albence, and the U.S. Department of Homeland Security Acting Secretary Chad Wolf.

The 21-count indictment charged the 13 leaders, members, and associates with violation of the federal “Kingpin” statute and multiple drugs and firearms offenses, including transporting bulk quantities of methamphetamine from Los Angeles to Las Vegas.

The UK’s National Cyber Security Centre (NCSC) said the hackers “almost certainly” operating as “part of Russian intelligence services”, have been targeting organizations working to develop a coronavirus vaccine in the West, but intelligence sources did not specify which organizations had been targeted, or whether any information had been stolen.

“We do not have information about who may have hacked into pharmaceutical companies and research centers in Great Britain. We can say one thing – Russia has nothing at all to do with these attempts,” said Dmitry Peskov, a spokesman for President Putin.

Many observers in the know have reported evidence of death threats, weapons caches and swastika graffiti all pointing to right-wing extremist networks among Islamic Merkeldom of Germany’s police, and unwillingness by command structure to crush the mounting threat of the widening penetration of the security services.

A perpetrator calling himself “SS Obersturmbannführer” (lieutenant colonel) — a reference to the most despicable period in German history, the very same persons of that rank in Nazi Germany who were responsible for organizing the abuse and murder of millions of Jews from across Europe.

This year — 2020 — German cabaret artist Idil Baydar received a death threat from someone using that moniker. Baydar is a successful entertainer who takes a scalpel to the daily racism immigrants face in Germany. Not only do her acts make millions of Germans laugh, they also make them reflect.(DW)