It was great to be back in my home state of FLORIDA to make my official return to the campaign trail. I am energized by your prayers, humbled by your support, and absolutely determined to finish what we started and Make America Greater than Ever Before!
565.5K views
0:00 / 0:30

Getting ready to land in Florida. BIG CROWD! Live on various networks:

allows more negative ads on me than practically all of the other networks combined. Not like the old days, but we will win even bigger than 2016. Roger Ailes was the GREATEST!

Biden losing big in Florida. Only Fake Polls show otherwise! Bad for Healthcare. Thinks he’s running for the Senate. Forgot Mitt Romney’s name, and where he was!
9K
18.4K
71.4K 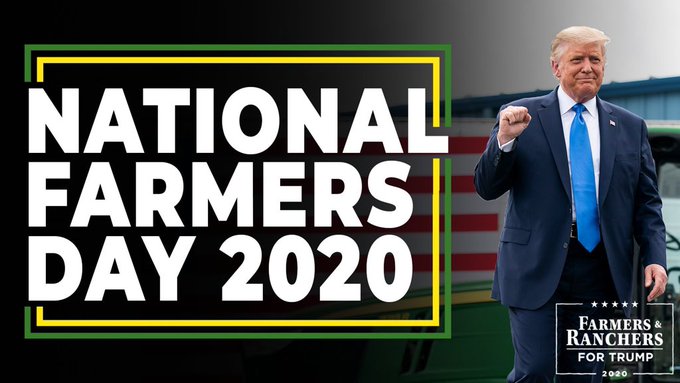 The World Health Organization just admitted that I was right. Lockdowns are killing countries all over the world. The cure cannot be worse than the problem itself. Open up your states, Democrat governors. Open up New York. A long battle, but they finally did the right thing!
14.1K
51.8K
147.1K

Republicans should be strongly focused on completing a wonderful stimulus package for the American People!
9K
18.7K
82.2K

Sleepy Joe Biden had a particularly bad day today. He couldn’t remember the name of Mitt Romney, said again he was running for the U.S. Senate, and forgot what State he was in. If I did any of this, it would be disqualifying. With him, he’s just Sleepy Joe!
12.4K
33.6K
110.4K

He should sue the women, and all of those who illegally worked with them, for false and disgusting accusations!!!
Quote Tweet

House Judiciary GOP
@JudiciaryGOP
· 13h
Remember what they did to Brett Kavanaugh. We don’t owe the Democrats anything. #ConfirmACB
.

Senate Republicans are moving forward with Amy Coney Barrett’s Supreme Court nomination, in the hopes that she’ll be confirmed by the end of the month, as Democrats have decried what they say is an “illegitimate” process when the Senate began to consider Mr. Trump’s Supreme Court nominee Amy Coney Barrett, who was tapped to replace the late justice Ruth Bader Ginsburg, and if confirmed, Barrett would receive a lifetime appointment.

The nomination comes just weeks before the US general election, where members of Congress, both House and Senate, and the presidency are on the ballot, all in the middle of a wave of COVID-19 infections that hit Republicans circles, some of which were traced to the White House ceremony to announce Barrett’s nomination.

“I believe Americans of all backgrounds deserve an independent Supreme Court that interprets our Constitution and laws as they are written,” Barrett said in her opening statement to the Senate Judiciary Committee.

The committee met in person in Washington, DC, despite fact that one of its members, Senator Mike Lee, had tested positive for coronavirus over a week prior to the hearings.

The UN Office for Disaster Risk Reduction reported in a new report named, “The Human Cost of Disasters 2000-2019,” listing over 7,000 major disasters that had occurred between 2000 and 2019, taking 1.23 million lives, affecting 4.2 billion people and costing the global economy some $2.97 trillion,

During the last two decades the mankind saw the number of disasters caused by extreme weather nearly double to 6,681, up from 3,656 between 1980 and 1999.

“We are willfully destructive. That is the only conclusion one can come to”, with action on climate change and other major threats waning, said Mami Mizutori, the UN Secretary-General’s special representative for disaster risk deduction.

Negative interest rates essentially turn the traditional system of depositing money in banks and borrowing upside down, benefiting borrowers and penalizing savers, as a number of beyond-left policies have been tried in recent months to help stabilize economies hit by the recessionary impact of the coronavirus, and it now looks like a new one could be on its way in the Islamic Sheikdom of UK.

“We are requesting specific information about your firm’s current readiness to deal with a zero bank rate, a negative bank rate or a tiered system of reserves remuneration – and the steps that you would need to take to prepare for the implementation of these.”

The letter is seeking information to understand lenders’ operational readiness and challenges “particularly in terms of technology capabilities.”

The letter is the clearest indication yet that the Bank is seriously considering turning rates negative.