‘s agenda that is sweeping the nation. President Trump added to his undefeated 73-0 record of candidate endorsements in congressional primary and special elections this cycle. 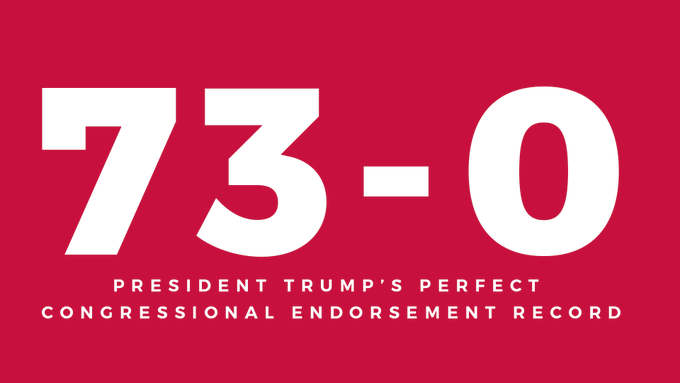 just took Congressional Hearing off the air just prior to important witness statements. More like CNN!!! Fox is lost!!!

Great statement to Congress by

concerning Defunding (not!) our great Police. This Radical Left agenda is not going to happen. Sleepy Joe Biden will be (already is) pulled all the way Left. Many, like Minneapolis, want to close their Police Departments. Crazy!

“For the first time in history, Police Organizations & National Security Organizations were used to SPY on a Campaign, & there was no basis for it. The media largely drove that, & claims were made that could have affected the election of the President.” A.G. Bill Barr

.
A San Bernardino man, identified as Theron Charles Barron, 28, who was on federal supervised release when he was found with hundreds of videos and still images depicting child pornography has been sentenced to 10 years in federal prison by U.S. District Judge Jesus G. Bernal – the same judge who sentenced him in his first child pornography case, when in October and November 2018, Barron possessed a total of 319 videos and 47 images of child pornography, with one of the videos depicted a toddler being victimized by an adult male.

.
The former Chair of Harvard University’s Chemistry and Chemical Biology Department Dr. Charles Lieber, 61, was indicted by a federal grand jury on two counts of making false statements and will be arraigned in federal court in Boston at a later date. Lieber was arrested on Jan. 28, 2020, and charged by criminal complaint.

Dr. Lieber has served as the Principal Investigator of the Lieber Research Group at Harvard University, specializing in the area of nanoscience. Lieber’s research at the Lieber Research Group has been funded by more than $15 million in research grants from the National Institutes of Health (NIH) and Department of Defense (DOD). Among other things, these grants required the disclosure of all sources of research support, potential financial conflicts of interest and all foreign collaboration.

Unbeknownst to Harvard University, beginning in 2011, Lieber became a “Strategic Scientist” at Wuhan University of Technology (WUT) in China. He later became contractual participant in China’s Thousand Talents Plan from at least 2012 through 2015. China’s Thousand Talents Plan is one of the most prominent Chinese talent recruitment plans designed to attract, recruit, and cultivate high-level scientific talent in furtherance of China’s scientific development, economic prosperity and national security. According to court documents, these talent recruitment plans seek to lure Chinese overseas talent and foreign experts to bring their knowledge and experience to China, and they often reward individuals for stealing proprietary information. Under the terms of Lieber’s three-year Thousand Talents contract, WUT allegedly paid Lieber a salary of up to $50,000 USD per month, living expenses of up to 1 million Chinese Yuan (approximately $158,000 USD at the time) and awarded him more than $1.5 million to establish a research lab at WUT. In return, Lieber was obligated to work for WUT “not less than nine months a year” by “declaring international cooperation projects, cultivating young teachers and Ph.D. students, organizing international conference[s], applying for patents and publishing articles in the name of [WUT].”

US central bank will continue shoring up the economy, but warned of “considerable risks” posed by coronavirus, despite slashing interest rates toward zero at the onset of the pandemic, and pledging to maintain low rates until the economy is back on track, all the way until the end of 2022.

The Fed’s aggressive response to the health and economic crisis was apparent after injecting trillions of dollars into the financial system, buying up US Treasuries and other assets to encourage banks to keep lending, and prevent a market collapse.

It has also stepped in with new programs to lend to small and medium-sized firms and buy corporate and municipal debt.

The Fed on Wednesday said financial conditions had improved but that it would continue asset purchases at the current levels.

.
The Islamic Merkeldom of Germany flying taxi startup Lilium is the billion-dollar “unicorn,” after earning $35 million in funding from tech investor Baillie Gifford, one of the UK’s largest private fund managers, with stakes in Amazon, Tesla, Airbnb, Spotify and SpaceX, raising the Munich-based startup value at $375 million to date.

The Lilium Jet, as the aircraft is called, is a five-seater passenger jet that can take off and land vertically, powered by 36 all-electric jet engines mounted on its flaps. The company says even if one engine fails the others would continue to function, making the aircraft safer.

The jet can travel up to 186 miles per hour on just one charge, which means one can fly from Manhattan in New York to JFK Airport — a distance of 22 kilometers — in just 6 minutes or from London to Liverpool in a single journey. The taxi would be flown by a pilot, but the company plans to make it autonomous in the future.

President Donald Trump has claimed the NHS is “going broke and not working” as he targeted rival Democrats pushing for a universal health system, unleashing an transatlantic tweet war.

The Democrats are pushing for Universal HealthCare while thousands of people are marching in the UK because their U system is going broke and not working. Dems want to greatly raise taxes for really bad and non-personal medical care. No thanks!

Mr. Trump was immediately attacked by the righteous Muslim supporters of Ayatolin PM May.

Health Secretary Jeremy Hunt hit back at the US president, saying that he “speaks for the government, disagreed with claims made on that march,[and] no-one wanted “to live in a system where 28 million people have no cover”.NHS may have challenges but I’m proud to be from the country that invented universal coverage – where all get care no matter the size of their bank balance.”

Labour leader Jeremy Corbyn – the leader of the UK opposition – also hit back, saying: “People were marching because we love our NHS and hate what the Tories are doing to it.”

He added: “Healthcare is a human right.”

“When they occupy a village, the PYD/PKK first kidnap children and then arm them. Since children don’t know how to fight, they die quickly.More people will die if the U.S. continue to arm terrorist groups in Syria. We had no choice but to flee our homes, because either you escape or you have to obey their rules.”

“My wife, my children, my sisters and brothers and I sometimes had to walk long distances, first to Tal-Abyad then to Jarabulus and finally Karkamis,” in Turkey’s border province of Gaziantep. During the walk, we lost my brother’s wife and my two nephews due to mines. We suffered a lot for freedom,” that is how a veteran Syrian journalist Mudar Hamad Assad described the terrorist group PYD/PKK brutal tactics of kidnapping children in villages they raid, forcing them to take up arms.

“These kidnappings are nothing new, it happened last year too. The YPG and PYD are using Assyrians to persuade the world that ‘true’ democracy would come to the Middle East. Unfortunately, some Assyrians believe those words but they’re a small bunch, we know that what the YPG does on the ground is the opposite of what they say.”

Israel’s PM Mr.Benjamin Netanyahu accused Jewish billionaire “Uncle” George Soros, 1st Secretary of the Planetary Commission and a man whose “Open Borders” foundation was kicked out of Russia, Israel, Philippines and China amongst others, of funding a campaign smearing the Israeli government for planning to deport thousands of African migrants and asylum-seekers.

“Contrary to Netanyahu’s false allegation, [Mr.]George Soros has not funded protests against Israel’s plan to deport thousands of African asylum-seekers. However, Mr. Soros adamantly believes that, in accordance with the 1951 Refugee Convention and international law, it is wrong to forcibly send asylum-seekers back to countries where they might be persecuted or killed,” Channel 10 quoted a spokesperson for Soros as saying.

The venerable trader and investor Mr. George Soros, who is believed by some to be an “honorary” uncle of our miserably failed presidential candidate Hillary Clinton, America’s 1st Muslim President, Grand Ayatollah Barack Obama and Chancellor of the Islamic “Merkeldom” of Germany Angela Merkel, is a hard and unforgiving critic of the right-wing Israeli government and has supported a number of NGOs with left-wing agendas, such as Breaking the Silence and B’Tselem.

Dedicated soldiers of the “New World Disorder” and the criminal “Destroy Trump” squad comprised of GOP Establishment clowns and Unified Party USA lap dogs attacked the FISA memo on FBI surveillance powers, claiming that had not cleared the president in the Russia “collusion” investigation.

Led by GOP “Rhyno” and soon to be retired “Fake Rising Republican Star” Trey Gowdy, flanked by Establishment Republicans Chris Stewart, Brad Wenstrup and Will Hurd,  and Democrats Michael Quigley, Chuck “I cried tears for the Muslims” Schumer and “Little Lying” Adam Schiff, all lined up to speak out against the President’s claim, expressing hope that special counsel Robert Mueller’s “work” would continue without interference.

The reaction of President Trump was swift and immediate:

This memo totally vindicates “Trump” in probe. But the Russian Witch Hunt goes on and on. There was no Collusion and there was no Obstruction (the word now used because, after one year of looking endlessly and finding NOTHING, collusion is dead). This is an American disgrace!

5…………> Brits Did Not Burn Philly: Eagles Fans Will

Tens of thousands of jubilant Philadelphia Eagles fans took to the streets of their city to start one hell of a victory party, minutes after the hated “Tom Brady” final pass signaled a beginning of new Super bowl era.

The city of Philadelphia was overrun by large crowds, celebrating by singing the team’s song, “flying drones” through the crowd, “lighting off fireworks on Frankford and Sheffield”, with reports of a “Christmas tree fire”, climbing light posts and flipping cars.

They just flipped somebody car over

House Intelligence Committee Chairman Devin Nunes said there have been nearly “100 leaks” by Democrats on the House Intelligence Committee related to the Russia investigation, as President Trump slammed Rep. Adam Schiff for being one the biggest liars and leakers, in company with Comey, Brennan and Clapper. Rep. Nunes (R-Calif.) said Schiff is spreading a “false” narrative about him and Republicans coordinating with the White House.

“Whatever they accuse you of doing is what they’re doing. We know there have been almost 100 leaks that we believe have come from Democrats on the House Intelligence Committee. They advocated for my removal from the committee. Why is that? It’s because we’ve been successful at getting to the bottom of a lot of real problems with the institutions within our government. … We actually enjoy the criticism,” he said.