on the U.S. preforming 50 million tests: “We have conducted nearly three times as many tests as all of the other countries in the western hemisphere combined”

: My Administration has ZERO outstanding requests for equipment from the states 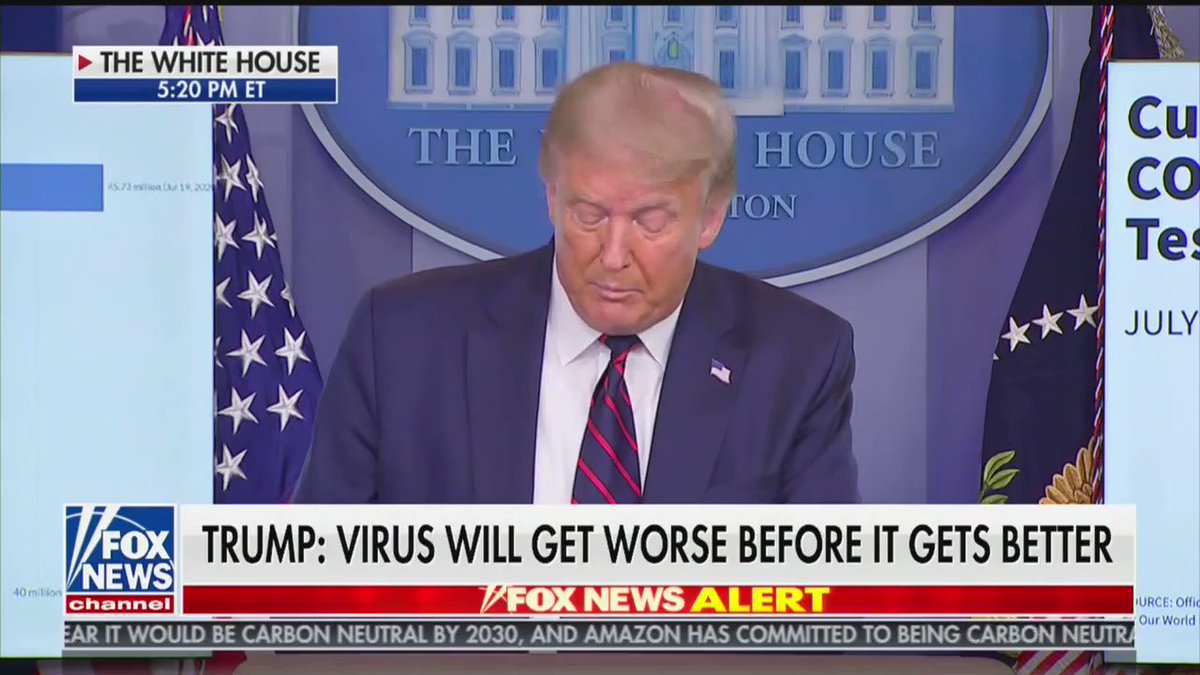 : “We’re asking everybody that when you are not able to socially distance, wear a mask.”

.
HOUSTON – Two Ukrainian nationals, identified as Maksym Nienadov, 36, and Volodymyr Nikolaienko, 33, pleaded guilty July 17 in the Southern District of Texas to conspiracy, trafficking in counterfeit drugs and smuggling goods into the United States. Nienadov also admitted to introducing misbranded medicine into the U.S.

In June 2018, undercover HSI special agents began communicating with Nienadov about the illegal sale of Keytruda. This prompted a months-long exchange which also involved Nikolaienko and resulted in the unlawful sale of counterfeit or unapproved Keytruda, Abraxane and Epclusa. Neither Nienadov or Nikolaienko are medical doctors, pharmacists or licensed pharmaceutical wholesalers in the United States and did not have authorization to sell the drugs.

Merck & Co. manufactures Keytruda, a medicine to treat cancer, while Gilead Sciences Inc. manufactures Epclusa, a prescription drug for the treatment of hepatitis-C. Celgene Corporation is a wholly-owned subsidiary of Bristol Myers Squibb and manufactures the oncology product Abraxane. In their legitimate form, the FDA approved all three drugs for distribution in the U.S.

“The production and trafficking of counterfeit pharmaceuticals poses a grave threat to the health and safety of unsuspecting consumers, impacts legitimate trade and compromises our national security,” said Mark Dawson, special agent in charge of HSI Houston.

.
While slicing pieces of genetic material found in blood samples taken years before the advent of COVID-17, scientists found T cells which were specifically tailored to detect proteins on the surface of the deadly virus, a kind of immune cell, whose main purpose is to identify and kill invading pathogens or infected cells. It does this using proteins on its surface, which can bind to proteins on the surface of these imposters, and each T cell being highly specific – there are trillions of possible versions of these surface proteins, which can each recognize a different target. Because T cells can float around in the blood for years after an infection, they also contribute to the immune system’s “long-term memory” and allow it to mount a faster and more effective response when it’s exposed to an old foe.

.
Miami is the new epicenter of the coronavirus crisis in the US, breaking records for new infections on an almost daily basis. Hospital admissions rise as the outbreak worsens and the death toll goes up.

A Happy Mothers Day From Bibi1581.com

George Sorbane Quotes: ” The Manitou of America will creep in you, rejoice you when she shines above, and offend and sadden you when she is put down”, The Endless Beginning

Steele Lawsuit Reveals ‘Most Direct Link’ Between Russia Collusion, Clinton and Obama White House -…
As transcripts of Steele’s court testimonies come to light, more and more is unearthed with regards to his involvement in the Russia probe.
thegreggjarrett.com
Donald J. Trump Retweeted

Michael Flynn — Here’s How The FBI Entrapped and Prosecuted an Innocent Man – Gregg Jarrett
If there was ever any question about the dishonesty and corruption that poisoned the case against Lt. Gen. Michael Flynn, newly released documents erase all doubt.
thegreggjarrett.com

Gregg Jarrett
@GreggJarrett
· May 6
The new book by John Solomon (with Seamus Bruner) will be out soon! The Russia & Ukraine scandals are unraveled, corruption & greed exposed. No one is better at uncovering the truth than these two investigative journalists. You can (and should) order now. https://amazon.com/dp/1642935719
.

US National defense is threatened by reliance on Asian chip manufacturers, hence the Trump administration has initiated talks with semiconductor companies, including Intel, to launch the development of new chip plants in the United State:

“We think it’s a good opportunity. The timing is better and the demand for this is greater than it has been in the past, even from the commercial side”, Intel’s vice president of policy and technical affairs, Greg Slater, said.

The moment Churchill announced the end of WW2 was remembered as the VE Day, or Victory in Europe Day,  the day Allied powers formally accept Nazi Germany’s surrender.This was the moment the British Prime Minister at the time told the nation that after six long years of deadly fighting, Nazi Germany had been defeated, bringing World War Two to an end in Europe.

Seventy-five years ago, Russian, Ukrainian and other Soviet Red Army soldiers took Berlin, but the brotherhood has seen increasing division along the way, Russia and Ukraine commemorate the end of the war in very different ways, while Moscow has continued to politicize the historic event, Kiev has shifted toward an increasingly Western approach.

Migrating birds fly thousands of kilometers between their breeding and wintering grounds each year. And while millions pull off this spectacular feat, human activities are making their epic journeys more dangerous.

Scientists have successfully transferred a memory from one marine snail to another, a research result that will improve scientists’ understanding of memory’s cellular and molecular processes that are very similar in humans and snails, and may pave the way for better treatments for post-traumatic stress disorder and Alzheimer’s disease.

Seven of the snails that received the new RNA then went on to hide in their shells for an average of 40 seconds when the scientists came knocking, according to a paper published today in the journal eNeuro.

“It’s as though we transferred the memory,” said the study’s senior author, Dr. David Glanzman, from the University of California, Los Angeles.

Professor Glanzman said in future it might be possible to awaken and restore memories that have gone dormant in the early stages of Alzheimer’s disease or ameliorate the effects of post-traumatic stress disorder.

During NASA’s Galileo spacecraft 1997 flyby Jupiter’s moon Europa, a bend in the celestial body magnetic field appears to have been caused by a geyser gushing through its frozen crust from a subsurface ocean, giving researchers reason to infer that water plumes are shooting into space.

“We know that Europa has a lot of the ingredients necessary for life, certainly for life as we know it. There’s water. There’s energy. There’s some amount of carbon material. But the habitability of Europa is one of the big questions that we want to understand,” said planetary scientist Elizabeth Turtle of Johns Hopkins University Applied Physics Laboratory.

“And one of the really exciting things about detection of a plume is that that means there may be ways that the material from the ocean — which is likely the most habitable part of Europa because it’s warmer and it’s protected from the radiation environment by the ice shell — to come out above the ice shell.

“And that means we’d be able to sample it.”

“Our worksite enforcement strategy continues to focus on the criminal prosecution of employers who knowingly break the law, and the use of I-9 audits and civil fines to encourage compliance with the law,” said Acting Executive Associate Director for HSI, Derek N. Benner. “HSI’s worksite enforcement investigators help combat worker exploitation, illegal wages, child labor and other illegal practices.”

ICE is the federal agency responsible for upholding the laws established by the Immigration Reform and Control Act (IRCA) of 1986, which requires employers to verify the identity and work eligibility of all individuals they hire. These laws help protect jobs for U.S. citizens and others who are lawfully employed, eliminate unfair competitive advantages for companies that hire an illegal workforce, and strengthen public safety and national security.

What are the advantages of being homeless? Below are some scattered thoughts:

1. You don’t have to watch “Fake News”, or any news at all, but could in the news yourself.

2. You ain’t got no money, pay no taxes, own nothing except your blanket and possibly a pillow.

3. You can sleep as long as you can until unwelcome hunger wakes you up.

4. No social fly considerations, fashion, daily washing and grooming and other annoying waste of time.

5. You can shout at anybody smaller than you, and show a finger to someone bigger than you, provided he is across a tall fence.

6. All the money you collect are absolutely tax-free, and the extra quarters earned by selling your empty cans and bottles do not need to be reported to IRS.

Apparently, the Seattle City Council is trying to violate your Constitutional rights to sleep under that cozy and safe underpass by voting unanimously for a passage of “housing affordability” tax, a “fat-cat” tax that will raise $47million from those poor guys at Amazon and Starbucks who have piled up so much money that a cash purchase of the US government is not out of the question.

“[It] forces us to question our growth here.”

And Starbucks said: “This City continues to spend without reforming and fail without accountability.”

Results from a new study at the University of Wisconsin-Madison supports the hypothesis that yogurt can reduce inflammation by improving the integrity of the intestinal lining, thus preventing endotoxins, the pro-inflammatory molecules produced by gut microbes, from crossing into the bloodstream.

In a sample of 120 premenopausal women, half obese and half non-obese, half of the participants were assigned to eat 12 ounces of low-fat yogurt every day for nine weeks while a control group ate non-dairy pudding for nine weeks.

Team leader Dr.Brad Bolling, assistant professor of food science at Wisconsin-Madison, and his associates took fasting blood samples from participants at various points during the study and evaluated an assortment of biomarkers that scientists have used to measure endotoxin exposure and inflammation.

The results showed that while some of the biomarkers remained steady over time, the yogurt-eaters experienced statistically significant improvements in certain key markers, such as tumor necrosis factor or TNF, an important inflammation-activating protein.

“The results indicate that ongoing consumption of yogurt may be having a general anti-inflammatory effect,” said Dr.Bolling.

A study published on Monday in the Journal of Nutrition provided new evidence that yogurt might help dampen chronic inflammation, a factor in inflammatory bowel disease, arthritis, and asthma.