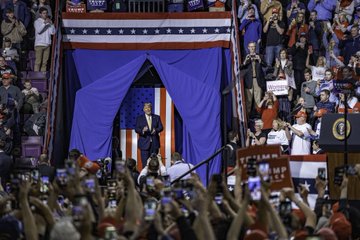 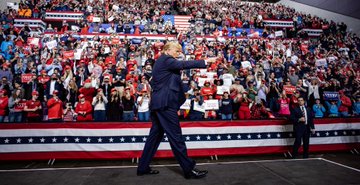 So good to see that Republicans will be winning the Great State of Alabama Senate Seat back, now that lightweight Senator

cast a partisan vote for the Impeachment Hoax. Thought his boss, Cryin’ Chuck, would have forced him to vote against the Hoax. A Do Nothing Stiff!

@LarrySabato
is much better at giving you the answer after everything is finished and the final result is in, than he is at telling you what is going to happen because, in fact, he doesn’t have a clue!
Quote Tweet

The Academy Awards, a.k.a. as the Oscars, began on Sunday night in Los Angeles, with a first acting award for Brad Pitt for Quentin Tarantino’s Once Upon a Time … in Hollywood and a writing win for Nazi-era comedy Jojo Rabbit, followed by controversy over a lack of diversity among the nominees, not surprisingly, the deeply disturbing South Korean thriller Parasite won four awards, including best picture.
Laura Dern picked up the award for supporting actress for her role in Netflix’s Marriage Story while South Korean director Bong Joon-Ho picked up three awards for Parasite, and Joaquin Phoenix won best actor for Joker, delivering an emotional speech, and Renee Zellweger won best actress for Judy Garland biopic Judy.

Did the “powers to be” missed something? Yes, the tearing of the President Trump’s speech by Nancy, “Anyone caught urinating in front of my mansion will be deported to Arizona” Pelosi’s Oscar for bad acting.

Bibi1581.com warning: The video depicts scenes of torture that may be offending and disturbing to some visitors of our website, and considered by experts as a crime against humanity. Please use your best judgement before continuing any further in this particular post.

BBC Africa Eye has uncovered shocking video evidence that torture is being used by multiple branches of the Nigerian police and armed forces, even though it is illegal in Nigeria. But images from social media show that a particular form of torture – a technique known as ‘tabay’ – is widely used in the interrogation and punishment of detainees, including children.
This investigation looks at the origins of this technique, identifies the worst offenders, and asks why they are not being held to account. It also reveals that in 2014 a senior police officer was involved in the torture of a young man who later died from his injuries.

Below find the latest news from Iowa Democratic horse-traders :

The Iowa Democratic Party (IDP) has released a projected national delegate count, indicating that Comrade Pete Buttigieg is leading with 14 delegates, Comrade Bernie, “Spendie” Sanders next at 12, “Native American staunch impersonator”, Sen. Elizabeth “Pocahontas” Warren with 8, “Uncle” Joe, “Sleeping in a wrong century” Biden with 6, and Sen. Amy, “Who the hell is she anyway” Klobuchar with 1, the release following the inconsistencies and mistakes in the previous count, as the full results were held up for three whole days, which bibi1581.com had described as a sequel of Stan & Ollie’s slapstick, “The Piano”.
On Friday, the Iowa Democratic Caucus launched an independent investigation into its faulty voting system due to the delay of the results, Iowa Democratic Party Chairman Troy Price said in a statement. Are we witnessing a march to install the first US openly gay president, who will pass a law that would require parents to force their children to choose their gender at an age no higher than 7 year old, and on their own?

The Chinese city of Wuhan corona-virus infection spread to more than 25 countries around the world, with the death toll from the corona-virus in China has reached 908 with over 40,000 corona-virus cases confirmed, with the previous statistic of the number of people who have died from corona-virus in China’s Hubei province had risen to 871, with over 29,600 infected. 1,795 patients have been discharged from hospitals.
On Sunday, 2,618 new cases of corona-virus were registered in Hubei Province, of which 1,921 were in Wuhan, the epicenter of the outbreak. 91 new deaths were added, 73 of them in Wuhan alone.
“As of 24:00 on 9 February 2020, Hubei Province reported a total of 29,631 cases of new corona-virus pneumonia, including 16,902 cases in Wuhan. 22,160 patients are still being treated in hospitals. 73,127 people remain under medical observation”, the Emergency committee statement said.