On this second anniversary of my #BeBest initiative I am reminded that now, more than ever, we must continue to work together & champion the issues that face our children in order to strengthen, protect & provide them with a safe & more secure future.
223.1K views
0:01 / 3:50

celebrates the two year anniversary of #BeBest, her initiative dedicated to bringing awareness to issues that impact the lives of children. Congratulations, and thank you! https://whitehouse.gov/briefings-statements/first-lady-melania-trump-celebrates-second-anniversary-best/ 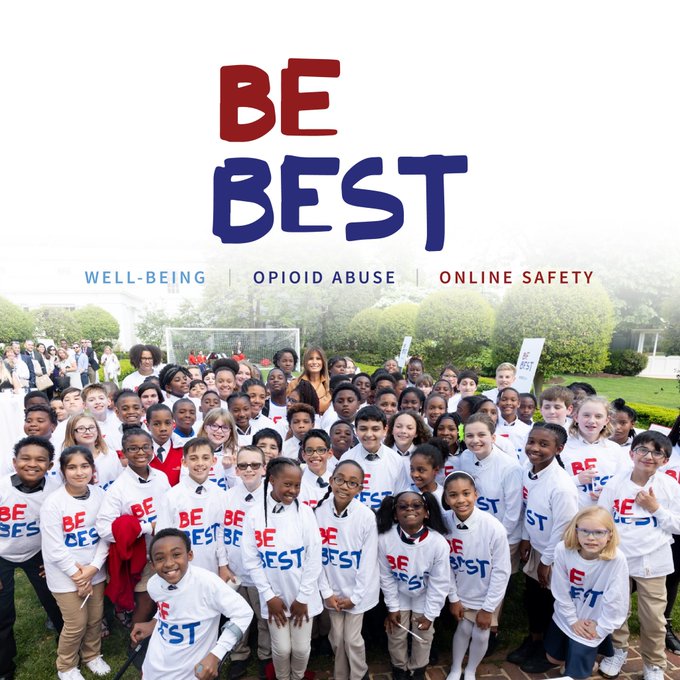 Medical professionals  at the Center for Preoperative Care, based at the Royal College of Anesthetists, suggest that stopping smoking, drinking less alcohol, exercising more, and maintaining a healthy weight can make a difference, as now over a million people have recovered from virus infection globally, but the time it takes to recover can vary.

Most people will only develop mild symptoms, which usually take a week to recover from, maybe longer, and extreme cases, it could be more than a year.(BBC)

As the US Federal Reserve unleashed a deluge of paper money to fund the 1929-like 30% unemployment surge, and cover politicians asses facing furious citizens who they have been deceiving  for years, many investors are shifting into yuan-denominated government debt at a record rate as they seek a safe haven amid the COVID-19 pandemic. The shift bears signs of longer-term re-calibration of global finance in the flight from the US dollar, as the Financial Times claimed China’s $13 trillion onshore bond market had become “an unlikely sanctuary,” with 822 non-Chinese investors held 2.26 trillion yuan ($319 billion, €280 billion) in Chinese central government debt, down from the record 2.28 trillion yuan at the end of February, but up an incredible 28% in the first quarter year-on-year.

But monetary policymakers “charlatans” pushed interest rates to new lows, with negative rates in Japan and parts of Europe, sending bond yields down, a fresh round of robbing the fixed rate investors; i.e. the seniors, aka “deplorable Trump supporters”, the very same people who sent Trump to the White House, and should the bank robbery continue, will throw him out of office come November.

Investors are also turning positive on China’s economy, as the government is expected to undertake additional fiscal stimulus to boost the economy, which could fare better than other major economies around the world this year.

The US president announced that new members of his virus task force would focus now shifts to medical treatments, and to relaxing the restrictions imposed on business/social life amid the ongoing pandemic, alleging the COVID-19 global pandemic impact on the United States eclipses certain other infamous events in the country’s history, such as 9/11 and the surprise attack on Pearl Harbor by the Japanese military in 1941.

President Trump said he did not wear a mask during a tour on Tuesday of a Honeywell International Inc. factory in Arizona after consulting the company’s chief executive, ignoring the fact

that the total number of people in the United States infected with COVID-19 has now surpassed the 1.2 million mark, with the disease claiming over 70,000 lives.

President Trump threatened to terminate the trade deal with China if an additional $200 billion worth of US-made goods and services purchase over the next two years do not materialize, including $40 billion agricultural goods:

“We’re going to have to see what’s going on because of what happened,” Trump said at a virtual town hall hosted from Washington, DC’s Lincoln Memorial on Sunday. He noted China promised they were “going to buy $250 billion worth of our product:

“Two hundred and fifty billion. They didn’t buy two cents. They didn’t want to buy from us. They took advantage of our country. Now they have to buy, and if they don’t buy, we’ll terminate the deal. Very simple.”

NASA Mars Curiosity rover has discovered a piece of organic carbon dated to be few billions of year old in a ball of mud located in what originally thought to be a site of a dry lake or a floodplain, an indication that the planet could have supported ancient life, and a new evidence in the atmosphere that relates to the search for current life on the Red Planet.

They are not necessarily evidence of life itself, but a good sign for future missions exploring the planet’s surface and subsurface, according to the study.

Organic molecules contain carbon and hydrogen, and also may include oxygen, nitrogen and other elements. Although commonly associated with life, organic molecules can also be created by non-biological processes.

After singing the role of the Baroness in the stage production of “The Sound of Music,” Eunice Gayson went on to be the first Bond girl in 007’s screen debut. She elicited the response “Bond, James Bond” in “Dr. No.” She died aged 90.

We are very sad to learn that our dear Eunice passed away on June 8th. An amazing lady who left a lasting impression on everyone she met. She will be very much missed.


147 people are talking about this

Gayson was set to play Miss Moneypenny, but that part went to Lois Maxwell instead.

The city of Volokolamsk some 60 miles from Russia capital of Moscow saw an incredibly bloody battle between the Nazi invaders and Red Army troops defending the Russian capital during the Great Patriotic War in 1941, a drama immortalized in the book  “Volocolamsk road”. Now 77 years later, it is again engulfed in a battle, but not with the Nazis, but Russian Federation bureaucrats who refuse to shut down an incredibly stinky and toxic dump that had made residents sick for years.

As tweeted by Trump: “based on Justin Trudeau’s false statements at his news conference and the fact that Canada is charging massive Tariffs to the US farmers, workers and companies,” the US president has instructed representatives, officials and lawmakers in the US to not endorse the final G7 communique.

After departing from the Quebec summit, bound for Singapore, US President Donald Trump slammed remarks by the Canadian Prime Minister at the G7 news conference, in which the latter noted that Canada would not be pushed around, as “very dishonest and weak.”

Earlier in the day, Trudeau said that the communique was agreed upon by all seven member nations. Trudeau later described the US metal tariffs as “insulting” and announced retaliatory measures.

“I highlighted directly to the president that… it’s kind of insulting, and I highlighted that it was not helping in our renegotiation of NAFTA and that it would be with regret, but it would be with absolute certainty and firmness that we move forward with retaliatory measures on July 1,” Justin Trudeau said at the press conference following the summit.

Online retail giant Amazon has been accused of destroying returned and as-new products in the Islamic Merkeldom of Germany, instead of responsibly repurposing much-needed resources, including mattresses, tablets, cell phones, refrigerators, washing machines, dishwashers, and furniture, have been simply thrown away by Amazon, according to German current affairs program Frontal 21, cited by Berlin weekly WirtschaftsWoche.

The Islamic Merkeldom of Germany media reported that Amazon employees described destroying tens of thousands of euros’ worth of retail items every day, while other workers noted that not only unsaleable products but many in ‘as-new’ or even brand new condition were disposed of, with little effort to reuse, leading many to accuse the online sales behemoth of spectacular corporate irresponsibility.

Leave the madness behind and listen to the music of eternal peace, Christus Vincit circa 1982.